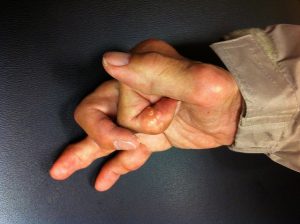 I had a patient come to see me in order to resolve chronic arthritis in her hands. Her knuckles on both of her hands were profoundly swollen into what looked like hot, red golf balls. Her goals were to get out of chronic pain, be able to hold her baby, and eventually get off her allopathic medication; in that order. After the first month of Heilkunst treatment, she had a bout of the “flu” and called me to see if there was anything I could do about her symptoms of vomiting and diarrhea. When we discussed her present condition at length, she let me know that she was feeling so poorly that she was obligated to call her mother to come and help her look after her infant daughter and her toddler son. I could sense how much she hated being at the mercy of her mother whose dysfunctional relationship she had not yet wholly reconciled within herself. The vomiting and diarrhea symptoms were a healing reaction indicating the need to “let go” of the control.

I accessed Thorwald Dethlefsen’s book “The Healing Power of Illness: The Meaning of Symptoms and How to Interpret Them”, wherein I found the first clue as to why this individual was suffering so much with this condition. Dethlefsen states, “The personal history of nearly all rheumatic patients reveals excessive activity and mobility. It is thus on active, mobile, agile, restless people that polyarthritis inflicts its long-term stiffness and rigidity, right up to the point where disablement finally forces them to keep still. What seems to be happening here, in other words, is that excessive movement and activity is being corrected for by means of rigidity.” Ah, so this makes sense for the diagnosis (Greek: dia means “through”, gnosis means “knowing”)

I love words. I love to shake them until the meaning or “logos” (which means the divine incarnated spirit born out of thought reflected in “the word” or, the rational principle that governs and develops the universe …no less). Just playing with language is a good enough reason to get out of bed in the morning for me. With regards to Arthritis, it is interesting to look at the German word starr (rigid), which is closely related to the word stur (stubborn), steif (stiff), storrisch (obstinant) and even stieren (to stare) and sterben (to die).

As far as I can tell, arthritis is like a mineralization that usually begins in the extremities where the individual is not wholly incarnated consciously. Arms and hands are the purveyors of giving and receiving, and legs and feet are the instruments we use to move forward in our lives. Nature takes notice when we are “doing” out of obligation as opposed to love, and she begins to deposit salts that begin to cement in the joints over time. I often tell patients that it is a bit like having to dust and vacuum your home once a week, as nature needs to be wholly convinced that we are occupying space, otherwise her job is to take back what she claims is rightfully hers. If you’ve ever seen a person rigidified after death, you know how effective she can be in realizing her goal. Ashes to ashes, dust to dust … Our job is to convince her we are fully and wholly occupying our domain, out of love, and that she had better back off!

Narayan-Singh (aka Michael J. Lincoln, Phd.) wrote “Messages From The Body: Their Psychological Meaning, The Body’s Desk Reference”. It is an awesome reference I use when wanting to source the meaning behind illness in order to form a true diagnoses. For arthritis, he describes the condition as a “hardening of the attitudes.” He goes on to say, “they have a pronounced tendency to immobilization, self-criticism, lack of self-worth, fear, anger, and a feeling of being tied down, restricted and confined. They feel unloved, with a resulting resentful bitterness and judgmental nature.” Apparently these individuals suffered a gloomy and despairing childhood where they never knew when the next thing would go wrong, just that it would. They felt foresaken as the scaffolding (bones, joints, tendons, and muscles) of pure love, without attachment, was not established in childhood. Bingo … we have the whole truth now.

This was indicative of my patient’s case and over time, she has come to know this. The pain and swelling has diminished, her hands look as normal as mine now and she has reached her 1st first two goals. She still struggles with operating out of moralization and her intellect instead from a place of trust and love. I hear it in her voice when she says things like, “Now, Allyson, any mother would do the same thing if their child was suffering” at least every visit. If was given the chance to respond, I would say the answer is “no”. This intellectual loop she has created out of the belief that suffering is “bad” in an indication that her state of mind has not wholly resolved yet. We’ll see if she can let go of  “the doing” and enter the realm of true participation, warmth, love, greater ease, softening and true maternal nurturance … without the moralization. A true mother just is, she doesn’t feel the need to justify herself to any perceived authority!

One thought on “Arthritis: Nature’s Way of Telling You to Cool It With “The Doing!””