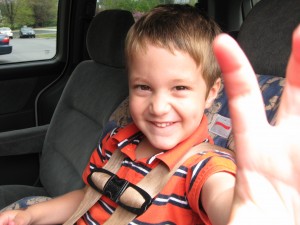 Just couldn’t wait until next Wed to tell you what a GREAT day Trevor had today. He woke up in great spirits with a huge appetite that lasted ALL day. He got everyone in the family involved in a pretend pirate game in which he declared that I was the captain and he and everyone else were the Mates. We have NEVER played pirates before so I don’t know where that came from. Later in the afternoon, Stephanie got him to play doctor and bandage a cut she had. He really got into character with that one too.

We went to playgroup at our church this morning and he brought a toy car along with him. I warned him that he would have to share it…which he normally would not do very willingly. She said that he would and sure enough, not only did he share…but he ENCOURAGED everyone to play with it…and came to me at one point dissapointed because no one else wanted to pay with his car…I quickly found a boy that wanted to play with it and he was happy again.

He ate a TON during snacktime at playgroup…this is in comparison to the past 2 Wed morning playgroups where he never even sat down at the snack table (the usual for him).

He was the first one there this morning and the last to leave. Not that I’m happy about what he ate…pretzels and graham crackers….but he did have SEVERAL helpings of each.

His energy level stayed high in the afternoon and he played well with Rachel (they usually CLASH). He had a swim lesson at 3pm and he did GREAT!! He could have focused more on the teachers instructions and his eye contact could have been better…but he did do everything that was asked of him once he listened or watched. Last Wed was his first lesson and he spent the entire 1/2 hour crying/screaming ” I want to go home” and never got into the water at all!!

He did not get as upset and throw things when he got frustrated trying to play a game this evening. Did not get upset when I left the house twice to drop off/pick up his sister. (Dad was home…but Trevor usually wants to go with me when I leave).

He just had smiles and giggles all day and was a lot of fun!!!

He was however VERY constipated all afternoon…with a blockage….had some liquidy bms leak around the blockage….but he did finally pass the LARGE BM at around 5 pm today. But, even with the constipation…he was in pretty good spirits….just could not SIT down at a right angle for most of the afternoon…poor guy!!

He did a funny thing at bedtime. He said, next time (meaning tomorrow night) could I have a baby bottle? I asked him why and he said because he liked the sippy thing. Interesting…. He did LOVE his bottles and we had lots of trouble giving them up!!!

Well…I knew you said we’d see rapid improvements with the addition of my treatment! Wow! I really think that ever since the MMR remedy, he has been improving in so many areas very rapidly. As for me….I’ve lost 8 lbs so far!! I’m under 200 and have no plans to ever got back up!!! I’m thrilled. I find this diet pretty easy to stick with….I do miss carbs…but if I just drink the Raspberry Leaf tea when I have a craving, it takes care of it.

Allyson McQuinn, DMH: I have seen Trevor for only 6 visits so far and his improvements have been monumental and we have focussed almost solely on clearing each vaccination booster/trauma using the principles of Heilkunst. When I first began working with Trevor, he did not make eye contact, he constantly flapped his arms, and had many patterns of a ritualistic nature. He would answer questions like, “How are you?” with, “My name is Trevor.” His Mom has been stellar to work with regarding the Regimen component as much of this jurisdiction had already been addressed, which would contribute to the greater resolution in the jurisdiction of lawful medicine we have come to expect in this case.