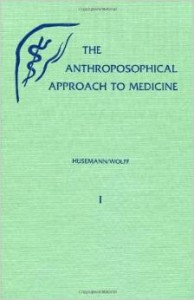 I was studying Husemann and Wolff’s take on Anthroposophical Medicine, Vol. I and read the following excerpt about H. Muller-Eckhard who devoted a monograph to the problem of “the illness of not being allowed to be ill.”

I was deeply struck by my own experience of this plight of the intellect to not know the deeper meaning behind the functional nature of illness. If you have a tumor, the Allopathic Doctor, will over-recommend surgery and some form of chemical warfare. However, he will not ask you why you feel you’ve chosen the path of “the un-lived life” or why you may “rescue others to the exclusion of yourself” as a function of your evolution. He also won’t suggest that your beliefs be looked at so that a re-infection can be avoided.

If I never saw illness, I would not know that fever in a child produces the most amazing growth spurt afterwards. I’ve witnessed Autistic children speak for the first time after a bout of a healthy fever. I’ve listened to many women, who have come off their anti-depressants, tell me they feel they’ve missed years of feeling any of their emotions. One women cried at a movie for the first time in twenty years after she stopped taking the pill. I had one fellow, during Heilkunst treatment, quit his job, leave his wife and strike out as an Art Consultant as he resolved his cancer state of mind. En route, though, he had many bouts of tears and anguish.

As a Heilkunst Physician, we have now come to the heretical understanding that a child has childhood diseases in order to become healthier. It is evident that without this function, the child cannot easily or effectively accomplish the complete adaptation process to fully enter the adult order. Without this capacity to navigate through the adversity of illness, he can not wholly learn to discern the promise of continual change without pause and suffering.

Tylenol and Vaccines suppress this spiritual mapping to becoming a whole, generative and creative being in the face of healthy adversity at a time in their lives when they are meant to develop this function. The Allopathic model simply can’t take the heat!

Summarizing in conclusion, H. Muller-Eckhard says:
“Every childhood disease has a meaning and an immanent
function that can become active in many directions. Quite often a
childhood disease is an irreplaceable help in life, which the child
cannot do without in many situations on the difficult journey out
of his magic and mystical state of consciousness into the world of
the crass reality of the adult order. In all the well-meant protective
immunization against childhood diseases, especially against those
involving desquamation (the shedding of the outer layer of a surface), one thing seems to have been forgotten: with the childhood diseases that are “eliminated,” and whose appearance and arising is made impossible, the active and wholesome functions of these diseases are also taken from the child.”

In fact, Harris Coulter has even linked the criminal element to the suppressive nature of vaccines in his book, Vaccination, Social Violence and Criminality. I, too, had the toughest time shifting my own paradigm. Crawling out of my son’s own Autistic spectrum paradigm was the vehicle to knowing that the function of childhood illness is absolutely critical to a human being’s development. And with Heilkunst medicine, all of this can be accomplished without suffering or harm to the child.

Allyson McQuinn, DMH, Author of The Path to Cure: The Whole Art of Healing