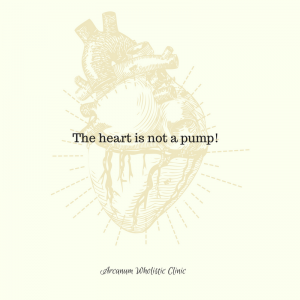 Most of us have been raised through an education system that still perpetuates the false belief that the heart is a pump.  In fact, if the heart were a pump, it would run out of steam well before our 20th birthday.  Its longevity has to do with the fact that it is not a driving force at all, but the truth is it is answering to one.

Have you ever seen a tornado?  Have you ever studied a snail’s shell?  Have you ever watched a tumble weed in an old Western movie? It is clear that weather systems and nature have been answering to a force perpetuating vortexes ever since the earth was born .  The thing is, so do we.

Willhelm Reich, a renegade Psychotherapist, who studied with Freud, and a Cancer-curing Bio-Physicist identified this universal force as orgone energy over 60 years ago.  The thing is that chemical science doesn’t want to have to deal with issues of orgone energy, nature’s true source for her power grid, because in the next breath, they’d have to validate the Creationists’ theories and then God.  If that were the case, then they’d also have to throw out the silly theories that we were derived from apes and that disease comes from germs.   For the Ape one, check out the book Tornado in a Junk Yard: The Relentless Myth of Darwinism by James Perloff.

If you want to prove the truth that the heart is not a pump, shine a light through a fertilized chicken egg shortly after gestation and then let us know what you see.  Yep, those fluids are pumping through that tiny organism and there ain’t a heart on board.  Look Ma, no hands!  So where does that force come from?
I was reading Dr. Husemann and Dr. Wolff’s, An Anthroposophical Approach to Medicine and I was studying their explanation of the heart by Dr. Harvy.  Now, when I study, I also listen to music in an effort to help inspire my intellect to turn off and allow the concepts to permeate my deeper, more resonant, etheric organs.  At this moment I was listening to Amadeus Mozart’s Lacrymosa, which I will include a link to below for you to listen too, if you like. I found the music was a intrinsic part to understanding the true ebb and flow of this energetic phenomenon:

“William Harvey is generally considered to be the discoverer
of the circulation of the blood and to be the one who established
the ideas considered valid today. Prior to him, however, Miguel
Servet, who was burned at the stake in 1553, described the
small circulation exactly in a criticism of the Bible. In a chap-
ter on the Holy Spirit, he describes an example of the working
of Christ in the blood of the human heart. The breath of the
creator working in the air of the earth, he says, penetrates by
way of the small circulation into the blood of man.
And how does Harvey himself speak of his discovery of the
function of the heart and the significance of the circulation?”

It is possible to call this movement a circulation in the same
sense that Aristotle compared the weather and rain with a cir-
cular movement in the upper regions. For the moist earth
warmed by the sun develops vapors; the rising vapors again
densify to rain and fall downward again, moistening the earth.

Here we have the circulation of the sun. In this and in similar manner through the movement of the sun, through its approach and retreat thunderstorms and other heavenly phenomena are brought about. So also it could possibly happen in the body that all parts are nourished, warmed, and vitalized by way of a warmed, perfect, vapor-like, spiritual and (if I may so express myself) nourishing blood, whereas the blood in the various parts of the body is cooled down, densified, and weakened and therefore returns to its origin, to the heart, its source, to the altar of the body (lar = protective spirit of a house; hearth) in order to regain its perfection. There, through the naturally powerful fiery warmth, this treasure of life (vitae thesauro), liquified anew, is impregnated with spirit and with balsam, as it were, and from here it is again distributed: and all that is depen- dent upon the beating movement of the heart. Thus is the heart the primal source of life and the sun of the small world (princi- pium vitae et sol microcosmi), just as the sun in the same rela- tionship deserves to be named the heart of the world. By virtue of this force and its beat the blood is moved, brought to perfec- tion, nourished, and preserved from decay and disintegration. By nourishing, warming, and vitalizing, the heart in turn pro- vides services to the entire body—this household god, the basis of life, the originator of all being. The heart is the root of the lives of living beings, the lord of them all, the sun of the small world upon which depends all life and from which radiates all freshness and all force.

I feel that passage is one of the most beautiful things I have ever read.  Did you enjoy it with the music?  Did you love the feeling of the ebb and tide as the force pervaded the crevices of your being to gather the pooling blood, propelling it back to be imbued and renewed in the heart?  Does it impress you to know that we never need a “blood change” like our cars need an oil change?   Are you also amazed to realize our Physiology is so dynamic, and that true knowing comes from the heart of it all?  Boy, oh boy, this excites me!  I must be in love!

Tagged on: The Heart

One thought on “The Heart: Look Ma, No Hands!”