BY Debra A. Grant

Reprinted from both Nepean This Week and Barrhaven This Week (online), Nov.25, 2008
If you’re one of the growing number of people rolling your eyes rather than your sleeves this flu season, there exists a safe and healthy alternative to the conventional flu shot that won’t touch your arm or your wallet.

Jeff Korentayer, a doctor of Heilkunst medicine, is one of several Ottawa-area, alternative medicine practitioners who offer some form of free homeopathic flu remedies throughout the fall and early winter flu season. The co-owner of Arcanum Wholistic Clinic says that his clinic’s Heilkunst remedy has “tracked a greater than 98 per cent efficacy in over hundreds of participants” since this service was first provided in 2002.

The one-time, oral dose is available at the clinic’s Bells Corners home/office, in addition to its Centretown location in the city’s downtown core. Most of the 15-minute appointment will be spent explaining how the remedy works, and answering questions, says Dr. Korentayer.

One of those questions undoubtedly revolves around the concept of “Heilkunst,” translated from German as the practice (“kunst”) of making whole (“heil”). More than 200 years ago, it was proclaimed by its founder, Dr. Samuel Hahnemann, as a complete medical system, transcending and encompassing the homeopathic tenets already discovered by this medical maverick.

This wholistic approach considers the roles of mind, emotion, and spirit, as well as physical body, upon one’s state of health. Unlike conventional (allopathic) medicine, which merely treats the symptoms of illness, Heilkunst roots out the underlying causes of disease. Treatment plans are tailored to the individual, whose life experiences can be explored via a variety of methods, such as the “sequential timeline” of documenting and treating physical and emotional traumas, working backward from the most recent event.

Korentayer’s personal triumphs via Heilkunst involve the permanent elimination of allergies, which he says “occurred within a few months.” This success ignited the desire for serious study of a path which eventually became a career for the psychology major.

Korentayer’s wife, business partner, and fellow doctor of medical Heilkunst, Allyson McQuinn, discovered her career while searching for a cure for her autistic-spectrum baby. She authored a book entitled “The Path To Cure: The Whole Art of Healing” to document this journey.

The practice of Heilkunst purportedly addresses and eliminates the negative effects of the drugs of conventional medicine, a subject linked with safety concerns associated with conventional flu shots and other vaccines provided by “mainstream” medicine.

“There are a great number of issues with vaccinations in general, and the flu shot in particular,” says Dr. Korentayer. “The medical problems boil down to two basic questions of safety and efficacy. On the question of safety, there have been numerous side effects, and health complications which include fatalities. This is due to the tremendous toxic load that is included with flu shot ingredients, which causes a great burden for the body to detox from, and is especially difficult where there are underlying immune system or health problems to begin with.”

With regard to efficacy, he goes on to say that “the key problem is that of the changing nature or identity of the flu strain from year to year. The CDC (Centre for Disease Control) has a very poor track each year (less than 15 per cent) in attempting to guess which strain might be coming each winter, something they need to do far enough in advance to have time for manufacturing the vaccine in mass quantities.”

Korentayer also noted that “conventional vaccines are only designed to attempt to induce an antibody response, which is the most superficial aspect of our immune response to infection, and on its own provides very little, if any protection.”

These issues are included amongst several areas of concern currently being researched by Korentayer, the results to be published in an upcoming resource book for parents, entitled “The Vaccination Myth.” The publication will help parents decide whether or not to vaccinate their children, and to show them “how to navigate through all the massive amounts of information available from both sides in this controversial debate.”

A website (www.thevaccinationmyth.com) has also been set up. Current content is sparse, but new material will appear over time.

In the meantime, the team of Korentayer and McQuinn continue to provide multiple Heilkunst services, in addition to the flu shot. Services include: sequential removal of shocks, traumas, and conflicts from cellular memory; lifestyle education (diet, exercise); detoxification; balance of hormonal issues; homeopathic vaccination (travel and childhood); homeopathic protocols for symptoms, conditions, chronic health issues; treatment of deeper emotional blockages. For more info and/or to book a flu shot call 613-234-4604 or visit www.Arcanum.ca. 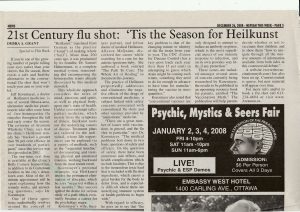