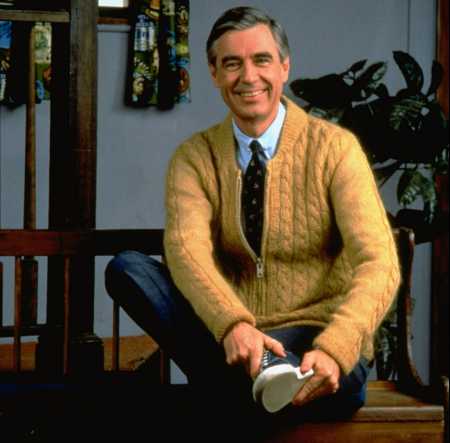 My friend and colleague, Helen Daniels, sent to me the most amazing video the other day. When I saw that it was originally aired on Mr. Rogers, I did a double take. It is one of the most beautiful depictions of mothers nursing their young that I have ever seen. I have had the pleasure of knowing a small number of healthy, natural women who are completely in flow, relaxed and at ease with nursing their babes. I have also been invited to help a small number of moms first latch their newborn in the initial stages of establishing nourishing wisdom. It is indeed an act of love, pleasure and intimacy!

It is fascinating to perceive the process of nursing from an Anthropological perspective (the study of Man) as therapeutically, we’re finding a huge link between the way a baby is nursed and the sad potential for neurotic behavior, including over-eating, later on in life.  Wilhelm Reich recognized that musculo-emotional armoring was much more profoundly entrenched in folks that had not wholly been held and nurtured by loving mothers and fathers.  I’ve treated a couple of foreign adopted babes who were bereft of attention and their little bodies were stiff and rigid even at the tender ages of 2 and 4.  It broke my heart!

I have worked with adults who suffer obesity and with Reich’s medical orgone therapy, we go back and re-enact “the crib scene” by having the patient lie down and reach out beseeching, imploring and crying for their mother.  It is interesting just how emotionally available this primal need is still active in the present.  There is absolutely no surprise to us to hear patients crying in pain, even in adulthood, at not having been held, heard or fed, except on a 3-4 hour schedule; a pathetic and sad oversight on the part of rigid educators for new parents in the 50s and 60s.  One woman I treated, cried out while clawing at the sheets that she is turning into an animal and could devour anything if she got it.  This is key to the oral block that causes her gluttonous behaviour today as when she does access food, she still can’t get enough.  Sad, but true for many.

Patients with swollen adenoids, chronic sore throats, abcesses, or thyroid issues are also suffering from blocked oral energy that needs to be addressed by a medical system which understands all the causes.  Chronic loquaciousness or “over-talking”, perhaps typical of your spouse, or mother-in-law, is just a symptomatic pattern often stemming from not being wholly heard, nourished or honoured in early childhood.  Unfortunately, most drugs or psychotherapeutics just palliate or suppress further this armoring that seemingly cements the orally blocked energy behind beliefs and patterns that just keep repeating themselves.  By exorcising – and believe me, it can feel like a spiritual exorcism at times – Reichian therapeutics (Medical Orgonomy) actually engaged the patient with the hidden but living content to be able to liberate the root cause.

Typical old fashioned talk therapy just further engages the patient with their intellect while they talk it all out.  This approach is limiting, as the patient and Clinician are wholly dependent on what the patient can recall of the past from memory. The intellect loves this, as it can only dwell in the past or project onto the future; it hates the present … especially the feeling.  The thing is that both patient and Clinician totally miss the proverbial boat as “the feeling” is the key to the release and remains locked behind the armoring and belief structure, never wholly liberated by all the yacking and intellectual looping.  In fact, the talk therapy is just prolonging the disease process and providing the illusion that content is being excavated, while both clinician and patient are seduced by the patterns of the past – they just end up going round and round “the feeling”, rarely causing a noticeable shift in the state of mind.  I know, because I treat a number of Psychotherapists!

As Heilkunstlers, we are typically able to dislodge the block in 3-4 visits with a combination of homeopathic medicine, regimen, and appropriate medical orgonomy techniques.  We bet Reich would be impressed with our results as he didn’t have homeopathic medicine at his disposal to cure the underlying disease states, or the capacity to simultaneously cleanse the bowel of all the unresolved … well … crap.  Yes, it is related!  We love that our therapeutics are nailing down this dimension for treatment; it is why we use the word “wholistic” to describe our clinic.  Where else can you go to get Naturopathy, Homeopathy, and Psychotherapeutics all under one shingle?  Or even with one clinician who knows and cares for your healing welfare en route to your path to cure?