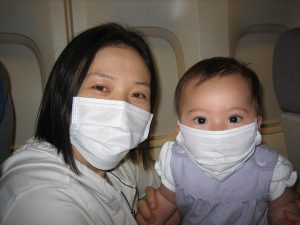 This morning, I received a few more e-mails from concerned patients who were wondering what we recommend to prevent the “Swine Flu” to prevent this alleged pandemic.  As I was going to a breakfast meeting, I happened to turn on CBC and heard the scariest voice of false authority imaginable announcing all the precautions one must take to avoid contracting this “deadly” virus, although not one confirmed case has shown up in Ottawa as of this morning. The fellow with the very deep voice said to be on the look out for symptoms of nausea especially after returning from Mexico.

With less than 100 cases in the States, the very expensive U.S. Guard has been notified even though Congress dealt with a swine flu scare a couple years back that did not materialize into anything.  And why is the military involved?  Are they going to use vaccines for ammo.?  What happens to you when you see young men and women dressed in black with helmets, shields and guns?  Does this promote a safe feeling or fear in the average North American?  Tuberculosis did more damage the year before and nobody called in the S.W.A.T. team for God’s sake!!!

As a Physician of Heilkunst medicine, it is my deepest goal to care for the health and well-being of myself, my family and my patients.  I am ordained to do this out of being wholly connected to the principles and truth with regards to this dynamic system of medicine in service to myself and those that I serve.  I recall once telling a young lifeguard that I will make the decision to swim where I wanted to and that he had no right to impose his belief structure about e-coli in the bay in the face of the capacity for my healthy immune function to over-come it.  I told him that I would take complete responsibility for my choice.  As he paced the beach, with his eyebrows furrowed, he finally called his Supervisor to “deal with me” who then threatened to call the police if I didn’t get out of the water.  I told him, I would be happy to, after I finished my last remaining 3 laps.  They watched dumbfounded that I did not acquiesce to their authority.

I would also like to introduce another time when Cholera was being studied as a potential epidemic:

“ Koch announced his discovery of the cholera vibrio in 1884. His conclusions were based upon the constant finding of the peculiar “comma bacillus” in the stools of cholera patients, and the failure to demonstrate this organism in the feces of other persons. It was not possible to reproduce typical cholera in laboratory animals. At the time the “germ theory” of disease had not yet obtained general acceptance [they eventually got this botched science through to us, though], and Koch’s announcement was received with considerable skepticism, particularly after it was found that similar “comma bacilli” could be found at times in the feces of persons not suffering from cholera, and often in all sorts of other environments – well and river waters, cheese, etc. We now know that these were saprotrophic species of Vibrio, which may be differentiated from the cholera vibrio by cultural and immunological methods [Yes, boy that is helpful in explaining away the truth]. But the correctness of Koch’s opinion was dramatically demonstrated by von Pettenkofer and Emmerich who, doubting the etiological relationship of Koch’s organisms, deliberately drank cultures of it. Von Pettenkofer developed merely a transient diarrhea, but Emmerich suffered from a typical and severe attack of cholera. ”

You will notice that the Mechanistic Material Scientists didn’t study the phenomena behind why Pettenkofer only suffered “transient diarrhea” and that our immune functions are not championed,  supported, and trusted to maintain our health and well-being.  Most folks are so paralyzed in fear as it is from prior traumas, like 9/11, that adrenaline has been shooting us up from inside ever since.  Worn out adrenals brings about resignation and what I call, the “sheeple” complex.  Over time, we just become resigned in the face of authority whether they have our best interests at heart or not.  We become like sleep-walkers, puppeted by media, the big Pharma and the Government.  We become prey!
We are always here to offer you a calm, and rational alternative, should you wish to have a homeopathic vaccine, and other remedies to boost your immune system, and allay your fears.
Tagged on: Cholera, Dr. Ron Paul, Fever, Influenza A, swine flu