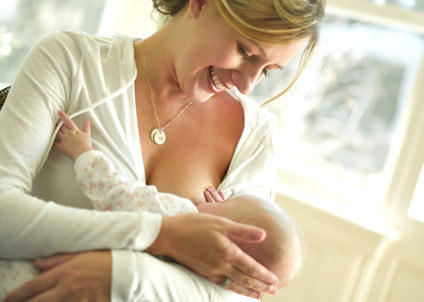 I know this is going to sound odd, but most of us women don’t realize that breast feeding is actually a male-like function.  If you think about it, the aroused nipple is actually a miniature phallus seeking to penetrate the open lips of a baby seeking healthy penetration.  If you’ve ever had the pleasure of nursing a baby as they curl their fingers around your breast, or your own finger, you can watch your babe become drowsier and drowsier as they seemingly get drunk on the warmth and love exchanged between mom and babe.  Some of you may have even noticed the babes cheeks suddenly quake and shake as they relax further into this nourishing exchange.  If they could speak, you might even hear them say, “I am safe, I am held, I am loved.”  This quaking in the cheeks is actually a facial orgasm!

As a dynamic Physician, I work with patients all the time whose needs were not met by their own mothers.  I have had clients who were force-fed as babes and toddlers, where a timer was rigidly set at the beginning of the meal.  One man told me he was instructed that he had 15 minutes to consume all of the food on his plate as a boy!  I’ve worked with obese folks who still have the feeling that if they don’t get all the food in at one sitting, they won’t have an opportunity to eat again.  I had one 300 lb. woman lie in her bed, raise up her arms in supplication and  begin to cry out the words “please feed me.”  As she cried, she began to claw at the sheets, she recognized that she must have been left in her crib and denied feedings.  She was furious.  In the 60’s and 70’s, some Pediatricians instructed parents that a babe should be nourished no more than once every 4 hours … by bottle, of course.  At the time, breast feeding was not in fashion.

Breast feeding has no rules.  Some babes may fuss for food every four hours around the clock, some cluster feed through the day, or evenings, and then sleep soundlessly though the night.  My own babe was premature, by 2 months, and he nursed every 1.5 hours day and night for the first 6 months.  At the time, I thought I was going to loose my sanity, but my job was not to question why, or listen to schedules or even other parents’ advice.  My job was to nourish Jordan as often as he felt he needed it.  He has grown into an amazing 15 year old teenager, almost 6 feet tall with size 12 feet, and he barely needs a weekly hug!  Some days, I’d secretly give a nickel to turn the clock back and share that level of intimacy with my beloved son.

Nursing, and nourishment, is hooked to our sexual organs.  Dr. Elsworth F. Baker, M.D., explains this phenomenon more thoroughly -“In the infant, contact with the environment is effected principally through the mouth, which at this time is a very highly charged, almost autonomous organ.  The mouth effects its own discharge of energy at its maximum point of intensity by means of a convulsive reaction which can appropriately be called the oral orgasm.  Many pediatricians, unaware of this, have made a diagnosis of infantile epilepsy when they observed this orgasm.”  What he is alluding to is that our babes use the breast to let go of pent up steam, or anxiety, through their mouths and if this capacity isn’t wholly nourished at this time, problems with food, sex and “saying” what’s on your mind can be affected later.

For babes who have good contact with a loving mother who is sensitive, warm and “alive”, the child will bond vitally with her, but also to his or her potential self as a warm, sensitive, autonomous, and “alive” sexual being.  As most of us know, nursing can bring on uterine contractions and it in some fortunate women, orgasms of their own, and if this arouses feelings of guilt in the Mom or she is genitally anxious, she will communicate this anxiety to the babe.  Resolving this schism, begun in infancy, is the area of treatment I specialize in.

I know this probably sounds like more than you bargained for with regards to simply nursing, but I will tell you why it is important.  If you will fast forward 30 years into the life of a babe that suffered a traumatic birth and did not receive the loving connection from the Mom through the aroused nipple you might be able to imagine that you are a fly on the wall in my medical clinic today.  You would see men and women cry with the pain and anguish of feeling abandoned, de-valued and despairing without being able to source out the cause.  If you watched one of my female patients mimic the sucking motion of the lips, you might gasp with wonder as they tell you they are experiencing the first genital sexual streamings (shivers of sexual yearnings) of their life.  One woman I treated actually had an orgasm!

Profound, I know, but it’s true that 80% of all emotional traumas are incurred before the age of 3 years of age.  All neurosis can be traced to blocked sexual energy.  The discharge never occurs.  We communicate so much more than just milk to our babies, in fact, most Moms will tell you that a babe suckles so very little in the way of volume that it is amazing to a lot of us that they even survive.  So, that that little bit of pus from the lymphatic system produced by the Mother on demand (milk is not actually stored in the breast) is enough to sustain a baby for up to 7 years if need be.

Rudolf Steiner recommends weaning a babe within the first 18 months of life, otherwise the babe will be subject to the Mother’s karmic baggage taking on such diseases as Cancer, Tuberculosis, Syphillis, etc. that may be coming down the family line.  Yes – these diseases still live within our genetic framework and can only be cured on the basis of the law of nature : like cures like.

Our babes actually need encouragement to healthfully separate from us so that they can begin their own journey to autonomy and freedom from us.  If all goes well, they should be packing up the George Foreman Grill and healthfully leaving for the frontier of their own lives by about age 21.  Most of us who’ve raised one of these sweet bundles of joy know that self-assertion starts as early as age 2 with a resounding “I do it!”  It is our job to pack in as much love and healthy intimacy with them between birth and the weekly hugs at 15.  It all starts with breast feeding!

We can celebrate this awesome adventure when we wholly cherish and nourish our babes with our whole labile, creative, loving and sensitive selves in the short time we’re offered this opportunity.  I recall the sadness I once felt coaching a new mom with inverted nipples and the Cancer state of mind.  Her breast did not display the vitalized, “alive” eagerness I’d seen in other Moms.  The babe was groggy for days after birth from the Oxytocin and I suggested she call in a La Leche league consultant.  They did eventually find their way, but it was a very tough go from the onset.   My hope is that we can resolve the issues now before that babe ends up in an office like mine 30 years from now.