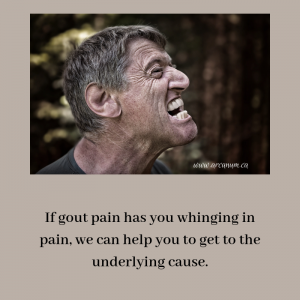 This is a condition that I’m very familiar with, as my Diabetic Uncle suffered gout in his feet.  I lived with him and my Aunt while attending University in Toronto and I was taxed with the duty to change the dressings on his foot each morning before leaving for school.  The open sores were putrifying and I often had to hold my gag reflex in check.  I have a great deal of compassion for these sufferers and maybe even more for their caregivers.  My Uncle’s foot also appeared clubbed as he wore such bulbous shoes to accommodate the calcified mass encasing the metatarsal of his big toe.  It sadly restricted his capacity to get around and he was always in pain, unless he was drinking.

Gout has always been attributed as the rich man’s condition and was determined as the by-product of years of rich foods and alcohol coupled with  poor elimination through the urogenital system.  Men have traditionally been more affected by gout than women.  Doctors will generally diagnose gout when they find an accumulation of uric acid in the blood.  My Uncle drank no water, preferring Johnny Walker Red instead, and so the natural waste products were never flushed from his system and allowed to accumulate in the joints of his extremities.  If you looked under the microscope of a gouty joint, you would see needle-like crystals, indicative of the inflammation and excruciating pain so indicative of this condition.

The allopathic Physician will, sadly, tell his patients that the sudden attack of symptoms is generally not treatable, except to just manage the pain, using anti-inflammatory drugs.  While he knows that it generally runs in your family, he won’t know why that is or what to do about it.  However, with Heilkünst Medicine, we know which Genetic Miasm  spawns these symptoms.  It is also the root cause of chronic diseases such as heart disease, all types of arthritis, iritis, cystitis, otitis media, and kidney disease.  Other clues leading to a diagnosis can be higher triglyceride levels in the body, high blood pressure (armoring), renal complaints, obesity, and a state of mind of mania, psychosis, living a polarity of extremes or to excess, and taking many risks.  It can also show up as ganglions, tumors and gouty expressions of inflamed calcified joints.

Most folks we talk to are not interested in compounding their issues with drug protocol since it does not have the capacity to cure the underlying cause; it just becomes a protocol of mere management of the symptoms and can contribute to a host of unwanted side effects.  Our approach is to apply natural remediation to address the root cause and address the symptoms on the basis of the law of cure — like cures like.  For example, pineapple contains enzymes and the substance bromelain and can be very effective as a natural anti-inflammatory.  Flooding the system with vitamin C can also support the repair of healthy tissue around the affected area, in addition to cherry and nettle tea; the latter can be taken internally or made into a hot compress placed externally on the affected part.  Something to be cautious about is building up the tolerance for Vitamin C slowly over time as it can occasionally precipitate the formation of kidney stones. 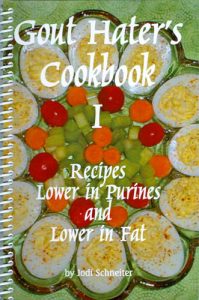 Quercetin can also be helpful in treating the acute inflammation of gout as a therapeutic measure as it helps to naturally reduce the uric levels in the blood.  It is a bioflavonoid that has strong antioxidant properties and other health benefits: it can inhibit platelet formation, and has anti-inflammatory properties.  Blueberry juice, celery, avocados, cherries and onions, particularly the outer, brown skins, are a rich source of dietary quercetin and flavonoids.

It has also been measured that substances called leukotrienes are present during an attack of gout and flaxseed can be instrumental in bringing the level of this chemical back to a viable level in the tissues.  Herbal teas such as cat’s claw, devil’s claw and the those made from olive leaves can be great natural remedies to reduce the levels of uric acid naturally in the blood.  Also, a diet high in essential fatty acids and oils, including flax, olive and coconut oil, can help reduce symptoms of gout.

While the Heilkünst Physician knows the fundamental genetic miasm that causes gout, there are also pathic remedies that can also help to address the pain and discomfort associated with this condition en route to the cause.  Give us a call and we can navigate the following medicines ensuring that you have the right ones for your disease:

Since gout sufferers are prone to their genetic predisposition to this condition,  it is best to seek Heilkünst treatment first to ensure that the symptoms never flare up for you in the first place.  Other lifestyle suggestions that can help prevent symptoms include: