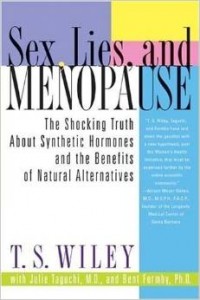 I once spent 3 days in a lecture hall in medical school listening to a Belgian Pharmacologist and Pharmacognosist describe in the most minute detail how to tweak an individual patient’s hormones.  By studying each individual’s case and using minute doses of naturally sourced estriol, progesterone, estrogen, or testosterone, apparently we could achieve the desired result of balance and homeostasis.  Clearly this Pharmacologist was restoring some of his patient’s health and well-being.  Their hot flashes diminished , their mind-fog cleared, their sex-drive and vaginal lubricity restored,  and their irritability leveled out.  This surely is the goal for all menopausal women, isn’t it?  At the time, in principle, I concurred with him, although it felt a little like assuming the role of “God.”  Also, the amount of research and work required in this field alone would mean I would probably have to specialize in just this area of patient treatment.  Tweaking hormones is a vast art and science and the risk of sending other systems out of whack frightened me. To me the research in this area is not conclusive in the allopathic or alternative realms.

I’ve studied incredible amounts of literature on menopause, both allopathic and alternative, and while my own research and efforts had taken me naturally towards  bio-identical hormones and beyond, I found the most amazing results totally by mistake.  Enroute, one of the best references offered to me was T.S. Wiley’s book entitled Sex, Lies and Menopause; The Shocking Truth About Synthetic Hormones And The Benefits Of Natural Alternatives.  Here I found the grist and stellar research that helped me to steer hundreds of women away from the allopathic drug Premarin, based on science.  Did you know that chemical constituents of this drug are literally derived from “pregnant mare’s urine?”  The mares are actually kept in small, restrictive box stalls and raped by the stallions in order to keep them perpetually pregnant.

I’ve worked on horse farms, including my own, and I witnessed once at the tender age of 17 a mare with one of her back kicking legs tied up with a rope underneath her and the stallion made to mount her as she brayed, slamming her body in resistance against the stall walls.  I felt devastated and threw up quietly outside the window I was peering in, without the owners knowing I was there.  Can you imagine the state of mind that women take on as a result of taking this unprincipled drug protocol into their physical bodies, minds and spiritual psyches?  It certainly got me thinking.

T.S. Wiley brilliantly realized that you can not successfully provide one single drug or answer to a woman suffering hormonal changes at the time of menopause.  She taught us to tailor the protocol based on the natural rhythmic cycling of our hormones. The thing is that our hormones are not just tied to the ebb and tides of the moon – we are connected to the whole cosmos and every planet in it.  If there are 49 parallel universes, we Physicians are going to have to get up pretty early in the morning to be able to out-manage the most finely orchestrated system with over 5,000 chemicals and hormones that are turning on and off with wee spigots from morning, noon, to night.

If I’m tired, in the beginning of my lunar cycle, angry or full of grief, trying to avoid my feelings, living more in my intellect, recovering from too much exercise, digesting a meal, my autonomic nervous system is working overtime in order to adjust not just estrogen levels, but my cortisol, progesterone, melatonin, mercury, prostaglandin, thyroid, etc.  The list is infinite and who was I to think I could just come into the fray of this finely orchestrated being and tweak a little of this or a little of that naturally, or otherwise.  What if I threw another system, like the endocrine system, completely out of whack?  What if a year or so hence, the woman I treated came back in with breast cancer from the soy or yam’s cream I’d prescribed?  There were too many questions and so I stuck with what I knew – the principles of Heilkunst, where I could not cause an ounce of harm, ordained to remove the blockages of disease.

This is where things became interestingly illuminated for me unexpectedly.  The Clinical results I was obtaining just by following our Cadeuceus chart were the same, or better, as the other Practitioners.  My Heilkünstler colleagues were also reporting the same.  Our patients suffering menopausal symptoms were being restored to a state of health, normalcy and grace, just simply by removing the shocks, traumas, and the roots of chronic disease, the Genetic Miasms.

One woman I treated restored her internal thermostat at the time we cleared the trauma of her vaccines.  During that month’s healing reaction, she had a high fever and then never produced another hot flash symptom again.  It was like her life force was stuck in a thermodynamic loop, suppressing her immune function since the allopathic vaccine shock.  I’ve served many others who, surprisingly, cleared their thermostat issues after treating for their vaccines, others after the Cancer and Syphillis Miasms.  Another overworked woman I worked with needed the homeopathic remedy Sepia which resolved all of her vaginal dryness and pain during intimacy.  Another woman I served with pronounced irritability and rage, needed to “kill off her mother” in a spiritual psychotherapeutic session and then she was able to wholly strike homeostasis with regards to her irritability and anger.  Her husband was ecstatic describing her as the women he had married.

So while I was stymied and paralyzed to try to micro-manage my patients’ hormones, balance and homeostasis was occurring organically in my practice.  As a result of removing the traumatisms on the patient’s timeline, removing the genetic Miasms, and treating the pathic expressions in the present easily and naturally as ordained by Dr. Samuel Hahnemann.  The by-product was that the body restored homeostasis all on its own, respecting the chemical blue-print set up by the Almighty!  What a relief it has been to me just to do my job without stepping into the dominion of God, not cause harm and get the same results without all the finagling and tweaking indicative of allopathic and alternative Physicians.  Phew!

You see, what I soon realized in my research is that my esteemed allopathic and alternative colleagues were attempting to come up with answers before asking the root cause questions such as, “Why are women suffering menopausal symptoms in the first place?”  What are the root causes of irritability, vaginal dryness, mind-fog and hot-flashes?  We go from being non-menstruating girls to being menstruating women without much of a blip on the landscape, or being told that our estrogen levels may kill us with resultant cancer.   This hasn’t been true for 6,000 years, so why now? Why is menopause considered a disease by the allopathic community?  Could it be that hormone replacement therapy has become a multi-billion dollar industry?  Which medical system has studied the phenomenon of women who’ve never suffered any menopausal symptoms?  None, I’ve found, except ours.

For example, I served a beautiful, vital and vivacious woman who was a nurse for 40 years.  She told me that she had loved her job.  She was in her late 80’s when I served her for some intermittent constipation.  Otherwise she was perfectly healthy.  This sparkly-eyed gem of a wee woman had just flown across the country from PEI to the Yukon the year before in a 2 seat-er plane with her resonant husband.  Sleeping out under the wing.  She showed me how she would have to take the little bit of luggage they carried and hold it on her chest in order to get lift-off from the runway before she could place the bags back at her feet.  She rescued numerous cats that she fed at the hangar up the road, had multiple organic gardens, multiple orgasms weekly, a gorgeous fish pond, worked as a nutritional consultant, built a spiritual centre in her home from architects’ blueprints 5 years before with her own hands, ate 4 small meals per day no bigger than her fist and had taken in a young woman who was struggling emotionally and financially.  When I asked her why she’d never had a menopausal symptom, she answered candidly, “Ally, I never had time for that shit!”  I loved her.

This is also the key to others I’ve served.  I once served an eighty year old dragon boat racer who was going to walk Spain’s El Camino way for the month of September.  She came to see me in order to get a Hep. A immunization to prevent any bacterial strains in water to infect her.  As part of my research, I slipped in the same question, “Why do you think you’ve never suffered hormonal symptoms from Menopause?”  She looked back at me with the most amazing fount of wisdom behind her eyes, and replied softly, “Who knows, maybe I do, but I guess I’m just moving too fast for them to slap a label on me.”  I loved her too.  My goal is to be one of these women of wisdom, vitality, righteousness, fulfilled and in love with my Divine self.  I will always move too fast for them to slap a label on me!

Florence Scovel Shinn touts in her book The Game of Life And How To Play It,

“The simple rules are fearless faith, non-resistance and love!

May each reader be now freed from that thing which has held him in bondage through the ages, standing between him and his own, and “know the Truth which makes him free”—free to fulfill his destiny, to bring into manifestation the “Divine Design of his life, Health, Wealth, Love and Perfect Self-Expression.” “Be ye transformed by the renewing of your mind.”

If it were up to me, I would eradicate the menopause label and the concept of “retirement” altogether.  I will generally leave a conversation at a cocktail party when these topics surface.  Individuals who engage in life-long learning, vitally engaged simply never suffer symptoms, any symptoms.  Women naturally stop releasing the same volume of hormones from their pituitary glands enabling them to procreate so that they can maximize their co-creation abilities.  When we were pregnant, our bodies also naturally adjusted for this temporary state of being.  God sets it up that way!  As I am now, too, transitioning from a menstruating woman to a non-menstruating woman, I am coming into my wisdom years, my sexual prowess, and directed vitality.  I know who I am and what I’m ordained to be.  I love that my gray hair and feisty will allows me to get away with saying precisely what is on my mind while also having the knowledge to get away with it!  I will leave the playing God, tinkering and tweaking to others.  I happily know what my limitations are.

3 thoughts on “Menopause Is Not A Disease”