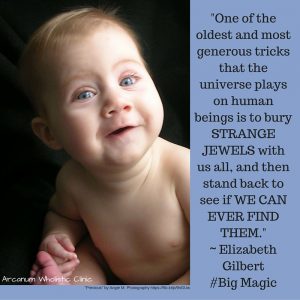 I wrote yesterday about some of the reasons that children tend to be much easier and quicker to take through treatment. This morning I remembered one of my favourite stories illustrating some of these points:

I was treating a young child through her time line (of shocks and traumas), and I was discussing the nature of the birth event with the mother. We discussed what happened during her C-section, as well as the emotional context for her through the event (which is directly experienced by the baby in utero).

While we were talking, the child had been playing on the floor of the office, and had found her way into a box of homeopathic remedies and formulas that I had left on the floor, as I was in the middle of re-organizing some of the shelves in my remedy cabinet.

She crawled over to us, and presented the homeopathic formula for treating “head trauma”, as if she had consciously selected that remedy specifically for herself to use. Interestingly, while I routinely use this formula when treating for a vaginal birth on a time line (due to all of the compression and twisting of the head and spine going through the birth canal), I had only recently been observing the usefulness of this remedy in treating C-section births, as well.

The mother and I discussed this topic of using this “head trauma” formula in the treatment of this C-section birth event, as it appears that the “birth trauma” seems to be an experience we are “hard-wired” to have, and is somehow still in our system after birth, even if we didn’t emerge into the world through the usual entrance. It is one of the primal triggers of early developmental stages, and even in its absence (ie through a C-section birth), it can still be an energetic experience triggered through the taking of the homeopathic formula at the time of clearing the birth event. (A similar topic is the use of the homeopathic remedy Lac Humanum [Mother’s Milk] when treating the time line of individuals who were never breast fed.).

This incident occurred at a time in my practice when I was beginning to observe this phenomenon in multiple cases, and the intuitive selection of this remedy by this child added an extra confirmation to what I was observing clinically myself.