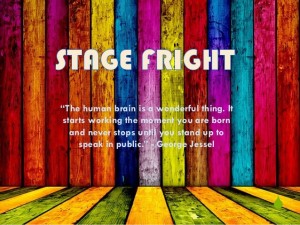 My blogging friend, Janet Kidd, has recently written about stage fright, and how to deal with it as a singer. I’d like to add some homeopathic remedies into the mix of her suggestions for helping with stage fright. For some patients, we’ll not only give them these remedies for when they do public speaking or performing, but also for generalized anxiety issues which paralyze them in their life generally. This is a good case study, by the way, of the importance of treating the unique qualities of a given condition, rather than matching a pharmaceutical drug to a generic label (such as “stage fright” in this case).

Choosing the remedy, or combination of remedies which best match your symptoms can work remarkably well to help you through a performance or public speaking event. Over the longer term, the deeper process of Heilkunst treatment will remove the underlying factors which create this tendency towards stage fright, and eventually the remedies won’t be required any more, as you claim more and more of a natural state of biological and psychological functioning. There will be any number of deeper factors contributing to such triggered responses of stage fright which can be transmuted through depth treatment. Common wisdom would suggest that stage fright is “just the way someone is”, but is not a natural state in itself, and is entirely reversable through treatment.