Early in my practice, I was treating a family where I learned a lot about putting the remedies that I had learned in school into real-world practice. The young daughter of this family had a peculiar obsession, which was that she had done something wrong, and would repeatedly ask her mother if she was too young to be put in jail. Some incident had happened in her Kindergarten class which triggered this feeling of guilt, but it escalated over time, even though the incident was relatively minor (in objective terms). 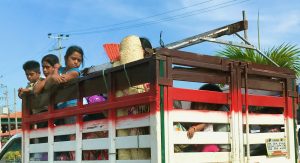 I was perplexed, as I keep giving her different potencies of the homeopathic remedy Lachesis, but nothing changed for her regarding this feeling of guilt. Lachesis, by the way, is the primary remedy we use for unresolved feelings of guilt, as related to underlying issues of self-esteem and self-worth. The law of cure being what it is, when the similar remedy is given the the patient at the right time in the right potency, the disease state is annihilated.

So why wasn’t this remedy working? In my inexperienced state, I assumed that I had the right remedy, but hadn’t hit a high enough potency yet. In fact, what I discovered further along in her treatment, when we got into treating her chronic miasms (inherited disease tendencies from the family tree), is that we hit upon the cure for her guilt state when we treated for her Sycotic miasm. I had known this remedy relatively well, but I hadn’t known the emotional side of it too intimately until I saw the resolution in this little girl. The emotional state of the Sycotic miasm also contains a type of guilt, but one which is different from the Lachesis guilt — this guilt has more of a basis in an immoral feeling, in the sense of having done something “bad” or immoral, as opposed to the Lachesis feeling of being inferior.

The instantaneous disappearance of this state of mind and behaviour in this girl, once she was given the correct remedy, was a great early experience for cementing the differential between these two remedies firmly into my mind’s eye. It also gave me a good general lesson about not favouring certain remedies because of some bias on my part, but to always remain open to different possibilities with each unique patient. The deep participation of each patient is what makes an accurate diagnosis possible, and the human tendency towards lazy short cuts and assumptions will always get in the way.

Not to mention that I helped keep this child from thinking she was going to be arrested and jailed!