When assessing a patient, both in their present life, as well as in understanding the nature of their past, I apply the model from Anthroposophical Medicine of growth and development unfolding over 7-year cycles. To introduce this idea in this blog, I will outline the nature of the first four cycles of life in its 7-year phases. In a later blog post, I will extend this exploration into later phases of life beyond the first 4 cycles. The descriptions below just touch on a few points in order to create an outline a general idea — there is much more depth to each stage, but the idea here is to find a starting point.

I previously described the relative functions of our four bodies, and these will provide the structure for understanding the first 4 of the 7-year cycles of growth and development. 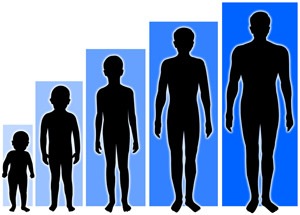 At birth, the baby’s physical body becomes visibly separate from the mother’s, and it begins its first 7-year cycle of development, which is primarily about taking command over the physical body. Think of all the schoolyard games, scraped knees, and even learning how to walk and ride a bicycle that occur in these 7 years. Of course, there are functions of the other bodies emerging, too, but they do not overshadow the primary mission of the physical body during this stage.

Somewhere around age 7, when the first baby teeth begin to be replaced by adult teeth, the child’s etheric body is “born”, and now separate from its mother’s etheric body, alongside its already separate physical body. In terms of education, this is the point where the beginning of academic learning can healthily begin, and having teachers with good character to be good “role models” for children at this age becomes critical, as the etheric body primarily navigates life through impressions. A gentle rhythm to the school day is important at this phase, as subjects which change too quickly during the school day create a kind of mental “indigestion” for the child, as is frequently seen in public schools, and lays the foundation for chronic illness later in life.

Puberty, starting somewhere in the vicinity of age 14, marks the third phase, and the point at which the child’s astral body becomes independent from its parents. Educationally speaking, this is the beginning of the time that students need to learn from experts in individual disciplines, as they are now ready to be educated at the level of pure concepts. Emotionally, the young teen is driven to socialize more and more based on individual resonance (“best” friends, etc.), and a stronger feeling of a separate “I” begins to grow stronger, as is seen in the rebellion against parents and other authority figures.

The fourth cycle begins around age 21 (the traditional “age of majority”), where the young adult now has their ontic organization (“Self” or ego) completely separate from their parents, and is (theoretically) able to enter the world as an independent, autonomous individual. This cycle, from age 21 to 28, is a time of grand exploration, whether in terms of exploring the world through travel and/or exploration of different world-views, religions, philosophies, or aesthetics. This is a good time for the expression “I’m willing to try anything once”, and for the young adult to begin to “find themselves” as a separate individual.

The sketches above are an idealized form of natural development, and of course, in the context of the conflicts and pressures of modern life, a patient will not have had the opportunity to unfold each of these stages in its natural form. A big part of Heilkunst treatment is to release anything in the way of allowing the individual to fully heal for anything missing from each of these stages in themselves.