The six genotypes which I have just completed examining in my recent blog series, form the complete set of constitutional types which we find in people who are in a relative state of health. There are six additional constitutional types, called ‘phenotypes’, which may co-exist with a person’s natural constitution, and which represent the state of the most stable form of compensation possible in the face of their layers of disease and/or trauma. The genotype, being a state of relative health, expresses a set of characteristic responses to the environment and patterns of healthy thinking, feeling, and willing centering around a particular core theme or healthy state of mind. The phenotype, in contrast, also represents a certain set of characteristic personality responses and behaviours, but based on cumulative constraints or limitations to the core state of health. It is a pattern of compensation which has become chronic, and will continue even after the original conflict or trauma situations have passed. The role of medicine within Heilkunst is key to unlocking such deeply engendered disease states.

With the six genotypes, one of the characteristic distinctions we make is between the three IQ, or introverted types (Silicea, Lycopodium, Calcarea Carb), and three EQ, or extroverted types (Phosphorous, Pulsatilla, Sulphur). For the phenotypes, one of the key structural characteristics we are looking at is the differences between stasis neurosis and psycho neurosis. These are psychological terms which represent blockages to the natural flow of the person’s life energy based either on external factors of suppression (stasis neurosis), or internal factors of repression (psycho neurosis). 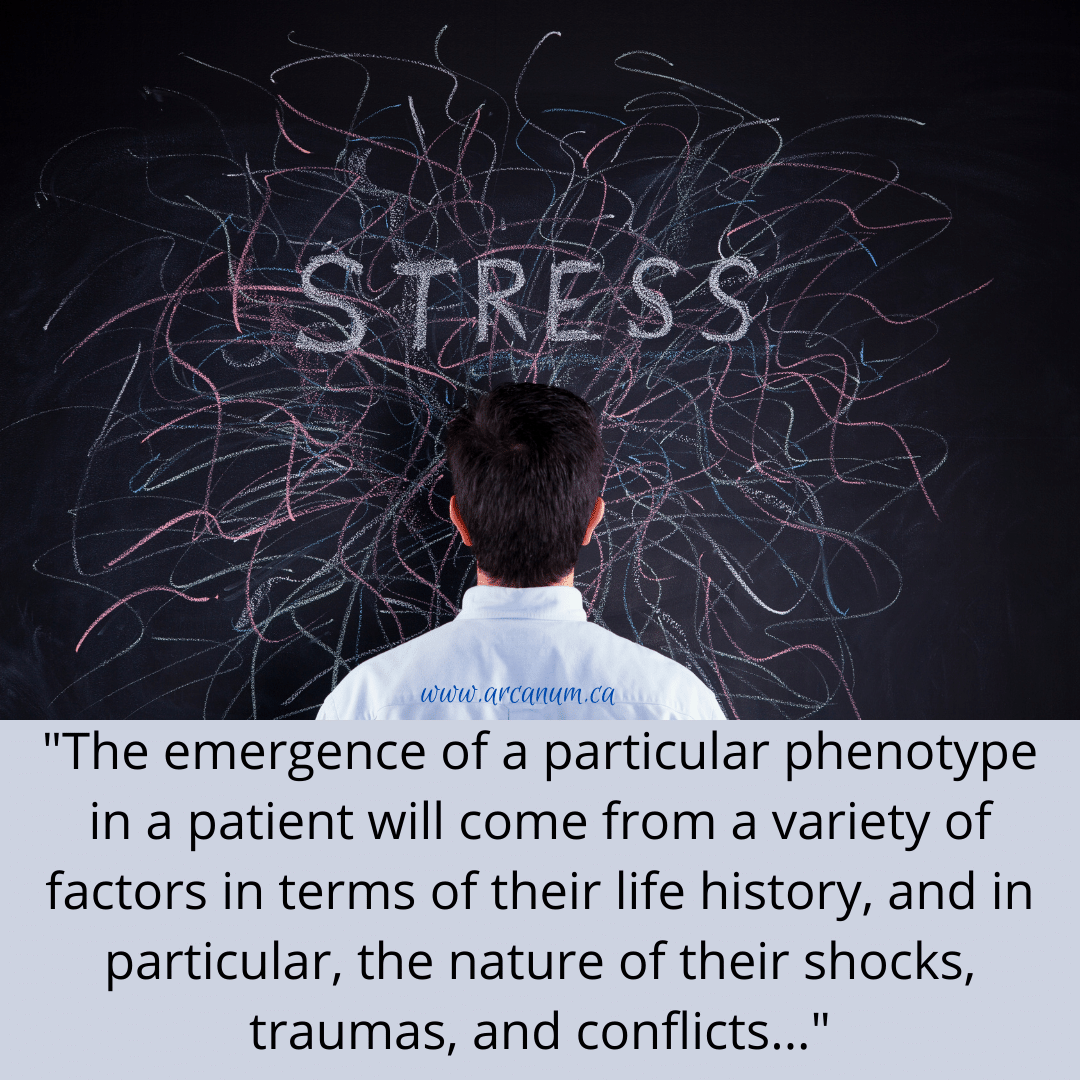 The emergence of a particular phenotype in a patient will come from a variety of factors in terms of their life history, and in particular, the nature of their shocks, traumas, and conflicts, as well as their broader ideogenic terrain (which is the realm of the highest form of disease caused by false beliefs, illusions, or delusions), as well as the genetic inheritance of the chronic disease patterns in their family tree.

The treatment of the phenotype is done with the corresponding homeopathic remedy, usually given in the patient’s daily dropper bottle. If there is still enough of a corner of a healthy state of mind remaining, it is possible to diagnose both the genotype and the phenotype, and prescribe for both simultaneously. Also, the phenotype will gradually melt away (sometimes faster, sometimes slower) over time as the patient’s time line of shocks and traumas are gradually whittled away, moving them always one step closer towards their natural state of health. As this process unfolds, their natural genotype becomes more and more visible, and the heavier elements of their personality fall away.

Tagged on: Examining the phenotypes, Health in the face of disease, photos, The phenotype as a state of compensation