The first phenotype I would like to introduce to you is Natrum Muriaticum. This remedy is made from the chemical compound sodium chloride, which is common table salt. The two separate elements (sodium and chloride) are poisons, but become inert together in this compound. Sodium chloride, and all other forms of salt are examples of crystalization. This forms a first image for its use as a homeopathic remedy, in terms of all biological or psychological processes which condense items (such as cell structures or emotional memories) to be more easily retained, or “held on to”. Lot’s wife, in the Bible, illustrates this to us with an artistic image of being turned into a pillar of salt when looking back and trying to live in the past.
Natrum Muriaticum is extremely retentive, and the key theme of the remedy revolves around a loss of trust. Nat-m holds on to the past, and has a very hard time of letting go of anything, whether past emotions of hurt, or objects infused with the feeling of sentimentality. This is the foundational disease state of mind for anyone who falls into the category of hoarders. Even the physiology of the cancer cell illustrates this, as the normal healthy balance of potassium being predominant inside the cell, and sodium surrounding the outside of the cell is reversed, taking the function back to a much older state of evolution related to creatures of the sea. Such a cell retains an excessive, unhealthy amount of fluid, illustrating this deeper theme of failure to let go.
Nat-m is characteristically over-sensitive, and is very easily offended or hurt, although they will generally hold it in. They can be extremely reserved, never allowing anyone to see their inner emotional world or true feelings in life. All of this is a function of a tremendous wall or emotional defence designed to protect them from repeating the hurts of the past. It is the feeling of avoiding getting into any relationship, other than one where they feel absolutely certain that they will be “safe” and protected, which is usually in a form of co-dependency in the Nat-m state. William W. Purkey was probably speaking to someone in a Nat-m state when he famously advised:

“You’ve gotta dance like there’s nobody watching,
Love like you’ll never be hurt,
Sing like there’s nobody listening,
And live like it’s heaven on earth.”
Nat-m is overly serious, and tends to support one or another cause of social justice, which is really a projection of their own attempt to defend themselves from ever being hurt again by another. Grand political initiatives such as Socialism illustrate this principle extended out on a larger scale. They tend to suffer their grief in silence, not able to let go in front of anyone, with the exception of a single romantic partner or close friend who has been brought inside their inner “safe” zone. Even then, it is usually not even their true core self that is fully opened up, but still an outer layer of their persona. 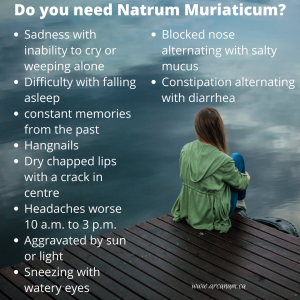 A characteristic bad dream for Nat-m is of their house being robbed, as this represents an unwelcome outsider breaking in, and gaining access to their most valued, private, inner world. Even in waking life, you’ll find that they may be overly cautious about their house security system, as well as all kinds of efforts taken to ensure their annonymity and privacy in every aspect of their life. The privacy craze in terms of internet policies is fascinating to view from the point of view of the energy of this remedy state.
The physical symptoms of Nat-m include headaches (lots of congestion of the energy of uncried tears), as well as sinus infections originating at the site of the tear ducts. They are very sensitive to noise. Salt is a very strong craving in this state. The skin may be prone to dryness, and even significant cracks. They suffer from constipation, which is a combination of the dryness of this remedy, and the difficulty in letting go. They can often suffer insomnia, which is yet another form of having difficulty “letting go” of their daytime consciousness, into the uncontrolled world of sleep and dreams. Conversely, they may need to sleep excessively, as a mechanism for avoiding the intimacy and demand for emotional involvement of waking life. They may be very retentive of water, in parallel with holding onto all of their emotional hurts.
In treatment, it may be very difficult for the practitioner to get to really know the inner content of the patient, and can take quite a while for a relationship of trust to be formed. The idea of treatment itself, particularly on the emotional axis, will be perceived as a threat, and these patients will often be the ones who only bring a physical symptom in for treatment, but solidly block any attempt to explore the emotional realm. Thankfully, the remedy works to soften these patients up, who eventually start to open up, and allow their emotions as well as their treatment to flow.

After taking Nat-m, do you need some help in letting go, and letting the tears flow? Try:

Tagged on: Constipation, Holding back the tears, Insomnia, Natrum Muriaticum for letting go of grief, photos