When I am taking a patient through treatment, one of the most foundational concepts of healing relates to the concept of “the direction of cure”. As I’ve written before, the mere act of making a symptom disappear is not necessarily enough. The questions of how it was made to disappear, and where it has gone are critical to understanding whether the disappeared symptom is a good sign, or not.

The core principle in the medical jurisdiction is the law of similars, or like cures like. When correctly applied, a given symptom will follow the direction of cure, meaning that it moves from a more vital organ or system to one of lesser importance. I like Dr. Hahnemann’s language to describe this, when he refers to organs which have “greater or lesser nobility”. 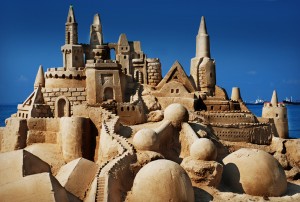 Welcome to my Kingdom” by William Cho https://flic.kr/p/4KCsTD

The metaphor is apt, as our body functions as a kingdom, and not as a democracy. In a kingdom, there are clearly some figures more important than others, with the king and queen sitting at the centre of importance, and the peasants being the least important. Our heart and brain are like the king and queen, in this sense, and the body always works to keep disease as far from these organs as possible. A disease appearing on the skin is actually the sign of a relative state of health, meaning that there are sufficient healthy defences to keep it from penetrating to the more important (noble) organs.

The typical approach to this skin disease in conventional medicine, unfortunately, is suppressive, such as in the use of cortisone cream, which appears to do good (make the rash disappear), but which actually drives the disease into a deeper, more vital organ. The classic example is to find that such a suppressed rash actually comes back as asthma (the lungs having more nobility than the skin), which the doctor unwisely prescribes a cortisone puffer for, thus further driving the disease to an even deeper organ, say the kidneys in the form of an infection.

The correct approach to treatment, in contrast, needs to be curative rather than suppressive, and in my Heilkunst office I’ll be watching for this pattern to systematically reverse itself. Using the example above, the first order of business is to treat the kidney infection, and by the proper direction of cure, it will reverse direction and move back into the asthma conditions of the lungs. The following treatment of the lungs in addition to removing the iatrogenic effect of the cortisone puffer will reverse the condition one more step back to the skin, where it can finally be treated correctly, and truly eliminated for good.

The nature of chronic illness, in general, when left to its own devices follows this same path of deepening — that is, without correct medical intervention, all chronic disease is trying to burrow its way deeper and deeper into our more noble organs over time, which we can witness over the course of a single lifetime, or from one generation to the next in terms of inherited disease patterns (such as the chronic miasms).

When it comes to your health, it is a good idea to leave behind your modern ideas of democracy, and respect the direction of cure (eschewing the direction of suppression), choosing medicine and therapeutics which push things out, rather than in. The disappearance of a symptom isn’t necessarily something to celebrate, if you’re not sure which principle was applied, and which direction it went in. I’ve often seen “health conscious” individuals even suppress their deeper tendency to chronic illness using mega doses of vitamins and supplements. They may appear “healthy”, but it can often be a very shiny veneer covering over deeply suppressed layers of illness. This is also the reason why many cancers “come back” after conventional treatment of chemotherapy or radiation, as those modalities push the root of the disease deeper, while making the more superficial tumor (temporarily) disappear. This reference to the principle and direction of cure should be the gold standard for every modality of treatment. Any modality, even using natural means, which makes symptoms disappear this way (through suppression) is also ‘allopathic’. Principles should always precede the specifics of how a modality is conducted.

Tagged on: A Disappearance of symptoms isn't enough, Healing from the inside out, photos, The difference between cure and suppression, The direction of cure