You’ve heard me mention in a number of contexts about the central importance to health of activating one’s true desire function. Many patients complain of not having “enough energy”, and ask me if there are remedies which can help them with that. Of course, the practical answer to that is as varied as there are patients, and I have to deal with this issue on a case-by-case basis. At some level, though, this larger question of finding and activating ones true desire function is really the ultimate level at which the question of “energy” needs to be assessed, as someone who is truly “plugged in” to their activated desire function begins to draw on a very different source of energy, which can seem limitless.

While I know what that is for myself, the question comes up as to how I can assess if a patient has discovered their true desire function, or not. There are some obvious signs, such as a face which “lights up” when talking about the true desire, but there are some less directly obvious signs at other times. If someone has only recently discovered what this interest might be for themselves, it is only a tiny ember which has not yet fully burst into flame, and there may be a lot more uncertainty around it. Part of assessing it goes back to the principle of “the direction of cure”, which I described yesterday, where an improvement may only provide a relative decrease in illness, rather than an overt expression of health.

This also plays into a related question which comes up, which is “what is the difference between resonance and attraction?” They are certainly not the same thing, although many people use those words interchangeably. As I described above, the same idea of a true resonance is evidenced by radiance, while all that attraction might offer is a type of apparant excitement, but which fizzles in short time, and more energy continually needs to be pumped in to keep it going over the long term. The exact same is true of nutrition which is resonant versus that which is merely attractive — the “attractive” foods may temporarily excite the taste buds, but don’t actually provide true nutrition or energy.

This distinction also conjures up an image for me of my Step-daughter, who has always been deeply resonant with horses. The depth of this resonance became clear to me this year, when I’ve dropped her off at the horse barn where she has her lessons. In no other area of her life does she “show up and participate” with such an intensity and presence. She certainly has many interests and talents, but it is only with the horse activities where this deeper radiance truly shines from her. At the moment I started to appreciate this resonance in her, I made a conscious commitment to myself to never force her to do any activity which she chose not to continue, where the resonance is lacking. [Adie, if you’re reading this,  your house chores are exempt from this rule.] 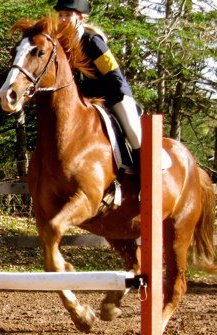 It is not an easy path, whether we’re talking about finding what it is in the first place, or sticking to it through all of its expansive and contractive phases, but when we’re talking about health, there’s nothing which comes as a higher priority than finding, cultivating, and unfolding one’s true desire function.

8 thoughts on “How do I Know if I’ve Found My True Desire Function?”