Anacardium Orientale is the homepathic remedy made from the crushed seed of the marking nut. Like Cannabis, and Anhalonium, it is also themed around a split — in this case, it is the split emerging from the conflicted feeling of not knowing if one is ‘good’ or ‘bad’, in a moral sense. It is related to a core layer of armoring, where the childhood stages were formed in a context of overly strict controls by one or both parents, where the natural desires and decisions were not allowed free expression, and much or all of the child’s energy was tied up in external rules and authority structures. 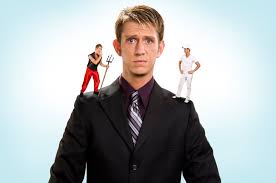 The often portrayed cartoon character image of an angel on one shoulder, and a devil on the other, each whispering their imperatives into the ears of the protagonist, is a clear representation of the feeling of being torn within this remedy state. Typical situations of fighting with oneself over issues of one’s will power, such as in desperately trying not to go off of one’s diet into temptation, illustrate this powerful self-conflict.

The presentation of this remedy state may often be in the form of an outward compliance with rules or authority, but with an incredible seething rage and hatred simmering invisibly on the inside. When this energy is not successfully contained, you’ll see outbursts of incredible profanity, and a speech which spews out aggressive or controlling forms of language.

Anacardium will feel very cut off from their feelings, and may have little or no access to their own inner moral compass as a reference point. A curious pattern that we’ve seen many times, especially when a younger child is in this state, is a strange behaviour of ‘running away’, at least in terms of staying always physically out of reach of the increasingly concerned parent. As a teenager, this is the “rebel without a cause” who breaks free from the perceived constraints of society, and avoids being subsumed by any structure of rule or order.

This poem by Rainer Maria Rilke evokes the feeling of this remedy:

At first a childhood, limitless and free

of any goals.  Ah sweet unconsciousness.

the plunge into temptation and deep loss.

inflicts on others what he once went through.

he takes his vengeance, blow by blow.

Yet hidden deep within the grown up heart,

a longing for the first world, the ancient one…

Then, from His place of ambush, God leapt out.

Tagged on: Angel on one shoulder and devil on the other, Hatred of authority, Overcompliance with authority, photos, The internal moral split