This is a fascinating documentary about how one American family dealt with their child’s autism by riding across Mongolia on horseback, in order to access different Shamanistic rituals. There are some very raw and emotional scenes which give a very direct insight into what a family lives through on an hour-by-hour basis with an autistic child. The courage of this family to undergo such a journey is a living metaphor for the lengths that autism families go through in order to find something which will help their child, and to find an alternative solution amidst a landscape of non-answers in Western medicine.

The father, Rupert Isaacson, is a Sulphur constitution, who was the courageous initiator of the idea in the first place, and who led his family off into this unknown journey. His initial thought was to find a place in the world which combined his son’s love for animals, and horses in particular, with the father’s previous experience with Shamanistic rituals. These two elements live together in Mongolia. If you understand the constitutions in homeopathy, you can see that it takes the sulphur part in each of us to meet the demands of autism, and grab life directly by the horns and hold on for the whole ride. 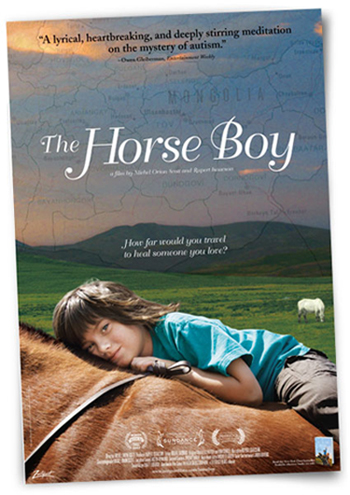 This documentary does not illustrate the specific approach to autism treatment which Heilkunst uses, however it brilliantly reveals the real life emotion which all autism families live through, and where all of these families are starting from when they do begin Heilkunst treatment. We generally suggest that parents get treated along with their children, but this is especially true in the more intense dynamics of an autism family. Some of the Shamanistic rituals displayed in the movie revealed an aspect of the boy’s disease which were carried forward from previous generations, which is also something we’re very familiar with in Heilkunst treatment.

A full range of emotion is portrayed in this movie — going from hope to grief and sorrow, to guilt and uncertainty, to desperation and horror, and exhaustion. These emotions are a constant reality for the family, and focus within Heilkunst treatment, and need to be treated alongside the treatment of the deeper causes of autism. One of the deeper fears expressed by the father in Horse Boy, parallels the fundamental fear of all autism parents — that their child will grow up, but never become independent. His fear in particular is that his son will never be able to ride a horse on his own, which is his own personal connection to the feeling of freedom. “What if he’ll never be able to ride on his own?” is the question the father asks.

In another scene in the movie, the father confides that he feels he was forced to be a much better and attentive father than he ever would have been with a normally healthy son. He has no choice but to discover, and help to foster his son’s unique desire function. The movie does illustrate the concept of not treating autism as a disease to be cured, but rather as an opportunity to find the unique qualities in these children, and to change the context within which they live, as well as to respect their innate and unique gifts.

Ultimately, this is a love story, as captured by the tagline of the film : “How far would you travel to heal someone you love?”.

2 thoughts on “Heilkunst at the Movies : Horse Boy”