The CoRe Bioresonance system is an invaluable tool in my practice, which has helped me to sort out the treatment plan for more difficult and complex cases, as well as speeding up the pace of treatment in more typical cases. I’ve written about resonance a number of times before, and I’d like to use a metaphor to illustrate how the CoRe system assesses resonance for treatment purposes. What exactly is happening during a CoRe scan? One of the reasons we chose to use this particular system, is that it is the only one currently on the market which allows the user to create their own customized testing trays. (A tray is simply a collection of similar items, which are compared to each other in terms of their resonance quotient for the patient.) Unlike low-tech versions of bioresonance, such as dowsing rods, or pendulums, a computerized system can ask dozens or hundreds of questions within seconds, rather than laboriously testing one single item at a time at human pace. 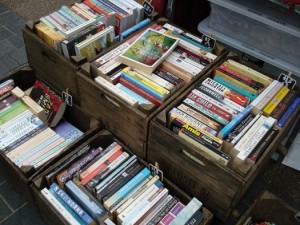 The metaphor I thought of recently goes along the lines of a box of books or movies, which I present to you one at a time — would you like to read this one? How about this one? After going through all of the items in the box, there will probably be a handful which have been selected on the basis of resonance. This is pretty much what the CoRe is doing when it runs each tray (which may contain even hundreds of testing items), and is measuring and retaining the items which were most highly resonant for the patient, whether in a positive or negative value. It is asking these questions at the level of the subconscious mind, which is much more accurate than the conscious mind which is prone to doubt. Whether our positive resonance for a certain nutritional item is ranking at the top, or our negative resonance for a certain disease or toxin, the feedback is invaluable for assessing what the patient needs next in their treatment. Reviewing the whole CoRe scan of a patient, in terms of a whole range of different kinds of trays that were tested, reveals a composite picture, or general theme that the patient is, or needs to be working on. The speed and precision of the tool (the CoRe system), married with the knowledge and interpretive ability of the practitioner’s mind, produces an advanced form of treatment which wasn’t previously possible. The portrait of resonance which is produced always creates a moment of recognition in the patient, whether it was of content they had previously acknowledged consciously in themselves, or not.

Tagged on: How the CoRe works, Metaphor for bioresonance, photos