One of the key concepts within Hahnemann’s system of medical Heilkunst is of approaching treatment in a new way, which does not demand any sacrifice to be made. Hahnemann made reference to nature and her functioning as being “crude, but effective,” meaning that it gets the job done, but usually at the cost of limb, or even life sometimes. He railed against the practice of the Allopathic doctors who simply mimicked this mode of nature, and whose methods would effectively sacrifice either a body part through surgery, or the healthy function of one or more body parts through drug side effects. This is even still an implicit part of the modern day philosophy of vaccination, which admits that the handful of side effects or even deaths from mass vaccination are worth it for all the lives which are supposedly saved (thus sacrificing the few for the sake of the many).

Even in the absence of any medical procedure, the function of nature itself is sacrificial, meaning that the body will start to shut down or deteriorate functions in a part of the body of lesser importance in order to try to preserve a more vital organ or function. A gangrenous leg will be sacrificed in order to preserve the rest of the body. I describe to my dehydrated patients how the long-term bad habit of not drinking enough water forces the body to progressively sacrifice one life function after another in the name of trying to preserve the most vital functions. Dr. Batmanghelidj illustrated this very well in his book Your Body’s Many Cries For Water, where he showed how so many chronic symptoms and illnesses will often just be symptoms of dehydration, and which need to be solved by drinking more water, and not by popping more pharmaceutical drugs.

I mentioned that Dr. Hahnemann railed against the sacrificial medical practice of his time, which included what we now consider to be quite brutal methods, such as using leeches or scalpels to drain off “excess” blood from the patient, as well as the highly toxic and dangerous drug mixtures of his time. Many people would tend to think that our modern medicine is much more civilized, scientific, and effective, however nothing has fundamentally changed in terms of its implicit philosophy of imitating crude nature and her mode of sacrifice. 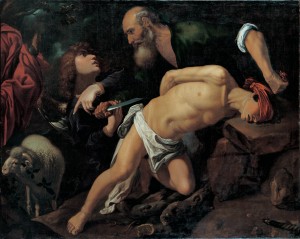 Pedro Orrente – The Sacrifice of Isaac

The approach to the treatment of cancer, for example, is still one of tremendous sacrifice on the part of the patient — either the offending tumour or organ is surgically removed, or the whole body is severely intoxicated with chemotherapy or radiation or both. There comes a point, to be sure, where surgery is necessary to preserve life, but in this example of cancer, as I’ve written before, having a tumour or mass surgically removed does not remove the underlying cancer disease itself.

In terms of our general energy dynamics, the engagement with what is attractive (Sugary, processed foods, for example) over what is resonant (Foods which are specifically matched to our blood, glandular, or metabolic type, for example) is another example of sacrifice. Both in terms of the regimenal jurisdiction, including our nutrition and exercise, as well as the medical jurisdiction, in terms of Heilkunst’s true approach to cure, are areas where sacrifice is still the dominant modality for most people, at some level. I’m still surprised at how many people are willing to climb up onto the sacrificial altar of the surgery table, in order to offer up one or more body parts to try to appease the gods.

In what ways does your approach to health involve sacrifice?

Tagged on: Nature is crude but effective, photos, The meaning of sacrifice in healthcare

3 thoughts on “What Does ‘Sacrifice’ Mean In Heilkunst?”