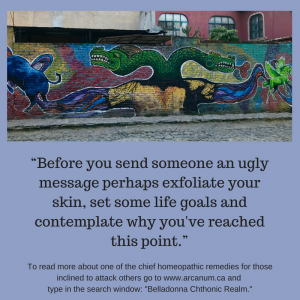 Belladonna is one of the top remedies for childhood fever. It produces an incredible heat, so much so, that if you touch the forehead of the feverish child, the heat is still palpably present in your hand even after you’ve removed it. It is one of the most common remedies used at home by parents, and should be a staple item in every homeopathic first aid kit.

The core feeling in Belladonna is of an attack which comes on suddenly, and which a tremendous amount of energy needs to be mustered to either run away, or fight off the attacker. The Belladonna fever in children is one where the fever, and the whole state comes on very rapidly. All kinds of delusions, and states of delirium are characteristic of this remedy.

The image of this remedy was forever cemented into my mind many years ago, when I had a co-worker who suffered periodic flare-ups of the Belladonna state of mind and feeling. She suffered from a delusion that the police were following her, tapping her phone line, etc., and at unexpected moments in the midst of a conversation, she would flare up into the most amazing accusations that you were working for the cops, raising her voice at you as her face turned beet red. There was a feeling that the possibility of violence was not far away at all. Before long, the storm would pass, almost as if nothing had happened.

Physically, this remedy can be useful in some epileptic conditions. It is also useful for bed wetting in children. In younger children, it can be the remedy to provide relief when aggressive biting is a problem. It is often a remedy very helpful for young mothers suffering from mastitis, especially where there are symptoms of extreme redness, and sensations of heat and even throbbing pain. It can also be helpful for the after-effects of sunstroke.

Tagged on: Fear as if from sudden threat, Out like a lion, photos, Sudden heat or violence

2 thoughts on “The Chthonic Realm : Belladonna”