The next remedy within the hot stream series of the chthonic remedies is Stramonium. Where Belladonna is related to the physical body, Stramonium is related to a blockage of function in the etheric body. The core feeling in this remedy is of fear (as in all the chthonic remedies), but specifically linked to a feeling of being abandoned. The image of being left alone in the woods at night is a good image to visualize the feeling in this remedy. 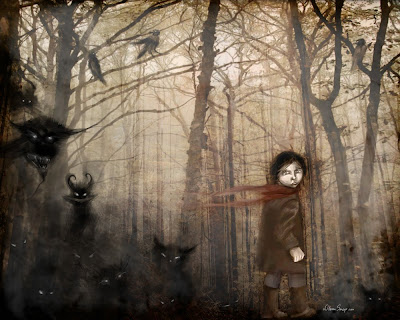 This feeling recalls the movie The Blair Witch Project, which was a kind of a horror movie about three young men and women going to shoot a documentary in a supposedly haunted woods near their community. There actually was a witch haunting the woods, who conspired to draw them further and further into madness and ultimately their own demise. The way the movie was marketed, it wasn’t clear to me going in if it was fact, or fiction, and I got completely drawn into the feeling of terror as if it was real. There was also something about the hand-held camera technique which created a feeling of being there with the primary characters, running through the woods scared (some viewers complained that it made them nauseous).

This is a very common fear state seen in children who have an extremely difficult time at night, especially if they are alone in the dark. They either need night lights, or even the overhead light left on to sleep. They are also the ones who keep turning up in the parents bed, or need a parent to sleep with them in their own bed, otherwise the fear is too much for them to handle.

During the daytime, they may be full of behviours designed to attract attention, which continually draw the parents in closer (ie the subconscious drive to keep from being abandoned). These attention-seeking behaviours may alternate with inexplicable and uncharacteristic violent behviours, which attempt to fulfill this same purpose.

Stramonium may be needed after a severe fright, or possibly from an emotional event which might have raised fears of abandonment, such as a small child witnessing their parents fighting. It is often a very useful remedy for adults suffering from post-traumatic stress syndrome, such as after returning from active duty in the military.

Physical symptoms may include a variety of stomach aches, as well as spasms or cramps. These are also children who may suffer bed wetting. Stuttering is another classic symptom of this remedy, particularly where the onset followed a fright.