As Arnica was the first remedy representing the cold stream of the Chthonic Realm (at the level of the physical body), Baryta Carbonica is the remedy for blockages related to the etheric body, which is the locus of all life functions and processes. You could say that it is an inversion of the themes in the chthonic remedy Stramonium, which is the more extroverted form of the types of fears expressed in Bar-c. The picture that comes to my mind when I think of the essence of this remedy is of a bashful child hiding behind their mother’s skirt. This is an image which portrays both the deep shyness of this remedy, as well as the state of emotional dependence. 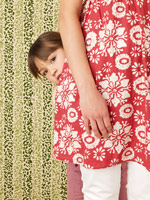 This is a remedy which is useful for any number of conditions which involve some form of developmental delay, including the various forms of autism. Delays at any level can be helped with this remedy, including physical, mental, or emotional. Likewise for adults whose process of growth was halted at a certain life stage, where you get a palpable sense that their mental or emotional maturity is still frozen at an age much younger than their chronological one. As with any remedy, this can be true at very subtle levels, which may or may not be discernible in any given case. This is especially true with this remedy, which has a core fear of being laughed at, or ridiculed, and will often work out one or several means of “covering up” their core vulnerability.

Bar-c is useful for any physical delay in development, such as in children who seem to fall to the bottom of the statistical growth charts for their age, in terms of height, weight, or other developmental milestones. Early diagnosis of autism, for example, is defined in terms of identifying children who do not achieve characteristic milestones by certain chronological points in their development.

The Sean Penn movie I Am Sam portrays the Bar-c state quite accurately. It is a story of a mentally retarded father, who is fighting a custody case with the State, who is threatening to take his daughter away on account of his mental age being about age 7. His lawyer, portrayed by Michelle Pfeiffer, is a great illustration of the phenotype Nux Vomica, as she is a hard-driving career woman who has alienated herself from her own son. The theme of “all you need is love” runs through the movie, and Sam melts the icy heart of this lawyer, and many people around him with the purity that only a child could muster.

Tagged on: All you need is love, Extreme shyness, photos