I’ve been working with a family, who has recently sent their eldest child off to university. In her first week, she was suffering a number of symptoms related to anxiety, including insomnia and diarrhea. She had many concerns about what was going to be expected of her, and if she’d be able to live up to expectations, especially her own.

When the mom called me, she described the total mental and emotional state, along with the specific physical symptoms. Aside from the symptoms I’ve already mentioned, the mother described that the daughter had been very irritable, and snapping at her siblings in the days leading up to departing.

Another thing that the mom pointed out about the diarrhea, was that it seemed to correlate with the daughters increased sweet tooth, which had gotten out of control towards the end of the summer. One particularly noticeable symptom was a very loud rumbling in the young woman’s stomach.

I gave her the homeopathic remedy argentum nitricum (which is made from silver nitrate), and within 48 hours everything was at least 90% back to normal. I chose this remedy on the basis of all of the symptoms that I’ve listed, as well as the core state of mind of this remedy which matched hers — that of an anticipatory or performance anxiety. On a similar token, this is one of the most commonly used remedies for stage fright, or any form of performance anxiety, whether on stage or off. 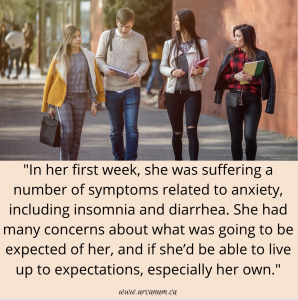