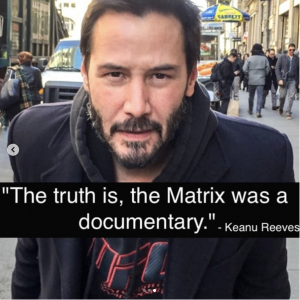 A movie that I refer to often is The Matrix (1999), when Im talking with patients about their journey through Heilkunst treatment. It is truly a multi-faceted work, which can be interpreted at many levels, and in fact has been by many reviewers. For the purposes of this blog, I just want to focus in on a few aspects which related more directly to the process of treatment, and how The Matrix illuminates some of the signposts along the way.

One of the key messages of the movie is of the quest for the self, as discovered by overcoming the false ego. The quest for health goes hand-in-hand with discovering the nature and purpose of our true self, as was pointed out by Dr. Hahnemann in his account of the purpose of health. It turns out that there are many obstacles along the way, and in fact, are a necessary part of making our own meaning of who we are.

One of the most famous scenes of the movie comes near the beginning, when Neo meets Morpheus for the first time, who gives him the choice of taking “the red pill, or the blue pill”. Choosing the red pill will allow him to see past the illusion and see reality for what it really is, while the blue pill will put him back into his own illusion, where he’d forget that any of this had happened, or that he’d made the choice. Cypher, a supporting character in the movie, at one point laments having taken the red pill, and wishes he could go back into the state of “ignorance is bliss” of the blue pill.

In his discussion of disease, and all of the obstacles to health, Hahnemann refers to “inimical potences” as a kind of catch-all expression. The powers, forces, and energies which make up both us and the world, include these “inimical potences”, which seek to thwart us at every step along our path, and keep us from ascending into a full consciousness of our self. The artistic portrayal of this in the movie is embodied by the agents, who actually can take over any regular person as necessary in fulfilling their job, and trying to block any progress on part of the awakened humans.

Neo slowly comes to understand the advice he’s often given throughout the movie, which is to follow the voice of his gut rather than his brain. This goes hand-in-hand with his process of self-discovery, and unfolding what his true mission is in the world. His reluctance and doubt gradually gives way to knowledge.

Tagged on: Overcoming the false ego to find the self, photos, The Matrix as a representation of Heilkunst, Truth and illusion