There are two “talent show” videos which have recently been brought to my attention, which have come together in my mind as a polaric example of what I’ve been talking about in recent blogs on the function and purpose of love. On one axis, I’ve explored the function of love as it expresses through each of our four bodies, and today I want to look at our other axis, where we are divided into an upper being and nether being. These two beings are like the two people who assume the front and rear positions in a horse costume, and the healthier we are, the more these two beings are co-ordinated in their activities. 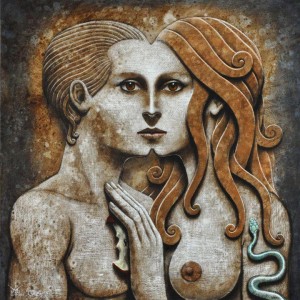 The first video is a representation of how our love function comes through our nether being. The singer named Panda who auditioned for the American version of X-factor is an example of someone with a pure, raw talent for singing, which seems to simply erupt from her without the benefit any formal training. As you’ll see in this video, her talent and love is to perform and share this raw singing power, which she directs through her expressed love for Simon, one of the show’s judges. Most remarkably, she has just “bust herself out” of the hospital, where she was being treated for pneumonia, where she heads straight back to in an ambulance after her audition. Being able to sing so powerfully during such a lung condition is a grand illustration of how our love function drives us to overcome any obstacle.

Taking a look at the polar complement to this piece, is a young Irish lad on the equivalent show from the UK, called ‘Britain’s Got Talent”, in singing a love song which he wrote. What the judges can tease out of him before he sings is that this is a song he wrote for someone, but for whom he hasn’t yet had the courage to sing it to. More of an ideal, or romantic love is felt here, which you’ll get a strong sense of in this clip.

Your mission is to digest and internalize the form of love function as presented by each of these singers, and then to find where in yourself you have the root capacity for each of these forms of love. When you have integrated the two sides together, you’ll know that your life is very much functioning through your objective desire function, and breaking through all obstacles on the way to unfolding it.