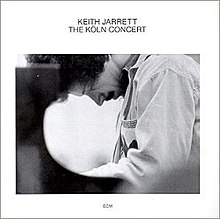 Keith Jarrett’s career is remarkable in the scope it’s covered, kind of like the way Rudolf Steiner or Wilhelm Reich have gone into many seemingly unrelated fields of study, as unified by their underlying capacity to unearth knowledge in different fields through their genius. Jarrett’s musical background is quite rich, and unusually spans both the classical and jazz worlds to a depth which would be remarkable even if he had only specialized in one of these areas.

One amazing feat he has accomplished is in his solo piano concerts, which are 100% improvised from the ground up. He specifically works before a concert to empty his mind of any musical preconceptions, which he found just get in the way of the improvisation process. His technical mastery is breathtaking, and his fans include many musicians around the world. More than his technical mastery, though, is his deep penetration of the wesen (essence) of musical creativity itself, beyond the limits of any one genre. His solo piano concerts are an incredible display of his ability to draw on seemingly any musical style at will in order to serve the deeper feeling he is portraying in his improvisation at that moment. Weaving together blues, jazz, pop, classical, world music, etc. appears that it would have to have been pre-composed, and rehearsed, yet it is not.

The Köln Concert came into existence under very trying circumstances. The concert had almost been cancelled, as it was discovered too late that the wrong piano had been moved to the hall, which had quite an inferior sound quality. To top it off, Jarrett had had some sleepless nights, and was suffering from back pain, and was ready to call the whole thing off. He was persuaded to go ahead with it despite all of that, and in his improvisation, created a style of piano music which best matched the inferior sound of this particular piano, which essentially sounded best when it was used in a more percussive manner. Both from a musical and technical point of view, there are a number of his other solo piano concerts which are better, such as The Paris Concert or The Vienna Concert, yet there is a special emotional quality to the Köln concert, which is what makes it such an enduring best-selling album.

The narrative which is created through the course of this performance speaks to a deeper objective feeling of the human spirit and its capacity to overcome seemingly insurmountable obstacles. The human journey, itself, is such a journey of overcoming obstacles, and this objective feeling in this piece is what has given it such a universal appeal. It is, in fact, the best-selling solo album in jazz history, and continues to be from one decade to the next. Out of the specific subjective challenges Jarrett was facing in this performance, he tapped into a deeper, universal and objective human feeling.

Tagged on: Essence remedies, photos, The Köln concert, The objective feeling of music