Being very precise with language is essential in any scientific field. In Heilkunst, I’ve already told you about the difference between “disease” and “condition”, for example, as a critical distinction to make in the process of successful diagnosis and treatment.

To orient these two terms, the distinction between our Upper and Nether being is used as the starting point, where anger is a function of our Upper being, and rage of the Nether. Anger, then, is more related to a conscious, rational process, such as when we respond to a perceived injustice that has been perpetrated against our self, or in the world at large. 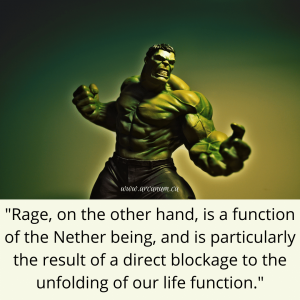 Rage, on the other hand, is a function of the Nether being, and is particularly the result of a direct blockage to the unfolding of our life function. Think of the way the Incredible Hulk suddenly transforms, and unleashes a rage-filled scene. Any automatic activity, such as is governed by our autonomic system, is susceptible to being captured by the rage function. Emotionally, when someone goes into a true rage, they are not at all directing their actions from their conscious minds. Think of such phenomenon of mass rioting after a sports event, or the examples of a mother who suddenly has superhuman strength, and lifts up a car to rescue their baby who has slipped underneath. The force of such events is very different from the run-of-the-mill outbursts of anger which anyone is capable of on any given “normal” day.

The treatment of these two very different emotions involves very different approaches to diagnosis and remedy selection. While patients tend to use the words interchangeably, it is critical in my assessment that I can tell the difference in terms of what they are describing, as well as the physical manifestations of symptoms.

Tagged on: photos, What's the difference between rage and anger?