As you may know, I have spent a considerable amount of time looking at the vaccination issue, particularly as the principles of Heilkunst and homeopathic medicines illuminate it. It is a question which is on the mind of many of my patients, especially when they have their own children, and are looking for a healthier, safer, and more effective approach to their family’s health.

While I have seen and treated many of the more severe reactions to vaccination and their long-term consequences, the more pervasive and subtle damage to my patients’ health due to the childhood vaccination program, which almost everyone has been subjected to, is a constant theme running throughout. Another way of looking at this same phenomenon, is comparing the health of children who were vaccinated versus those who were not. The un-vaccinated group appears to be much healthier in every dimension — physically, mentally, emotionally, and spiritually. 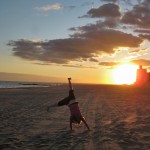 Cartwheel on the Beach by Courtney “Coco” Mault https://flic.kr/p/aqNBnb

You can see another side of this when you treat patients through their time lines, and witness the types of healing reactions and subsequent improvements to their health after clearing their childhood vaccine shocks. When I went through my own time line treatment, I noticed a particularly interesting shift after I had cleared my DPT shock. Within a week or so of taking the remedy, I spontaneously had the impulse to learn how to do a cartwheel, which I had never attempted as a child. I didn’t think about it until afterwards, but it was clear to me that this was a healing reaction in the sense of regaining an aspect of my natural childhood development which had been blocked by the DPT shot.

The stages of natural development of a child depend on a free-flow of life energy through their whole organism, and shocks, such as vaccinations, set up a permanent blockage to part of that flow. There are a whole range of possible reactions through all 4 of the bodies, including basic issues of co-ordination in the physical body, as seen in my own example of learning cartwheels.