In order to portray for you a more complete understanding of the concept of crude versus refined nature, I’m coming at it from a variety of angles so that you may see it in more of a three dimensional portrayal. I’ve recently blogged about the difference between ‘matter’ and ‘substance’, as well as my distinction between the crude versus refined aspects of sex. Today I’d like to portray an interesting aspect of this topic from a historical examination of the birth of modern vaccination method.
1796 is a fascinating year in the history of vaccination and immunization — it is when Edward Jenner revealed his discovery of his new method for vaccinating for smallpox; it was also exactly the same year that Hahnemann first wrote about his rediscovery and reclaiming of the ancient ‘law of similars’ as the natural law of cure as well as prevention of disease. Jenner was working through crude nature, while Hahnemann was working the same concept through refined nature. 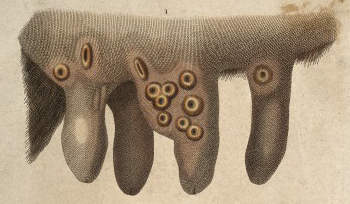 Studying the history of vaccination, both preceding and following Jenner, his method is especially notable when looked at with an understanding of Hahnemann’s system. His approach was the first and only within the history of crude vaccination to use a similar disease, rather than the exact disease being treated for. That is, he proposed using cowpox (a disease existing in cows) as the vaccinating agent against smallpox, which was a similar disease in humans. He had observed that milkmaids were generally immune to smallpox epidemics if they had previously been exposed to cowpox. Both before and after Jenner, it is not a similar, but an exact that is used; in other words, modern vaccination for smallpox uses a form of smallpox virus as the base ingredient.
Even before we address the issue of applying crude versus refined nature in vaccination, we need to very carefully heed Hahnemann’s warning against the danger of using an exact rather than a similar. This is one of the reasons why there are so many adverse reactions to vaccinations which are based on using the exact microbe. In the case of homoprophylaxis or homeoprophylaxis (homeopathic immunization), it is a similar rather than an exact which is being applied, as the homeopathic dose has been sufficiently altered to render it as similar rather than an exact match of the original disease.
Regardless of the fact that Jenner was not aware of Hahnemann’s observations or methodology, it is still fascinating that he discovered this method of prescribing similars at the exact same moment in history that Hahnemann began to write about this central concept in medicine. Jenner’s methodology was still incorrect in terms of using a crude application of nature rather than refined, there was a gold nugget of truth in his stumbling across this idea of similars instead of exacts.

Tagged on: comparing Jenner and Hahnemann in 1796, photos, The danger of crude nature vaccination versus refined immunization, Treating with similar diseases instead of exacts