At this time of the year when we start to enter the latter phase of the fall (at least in the Northern hemisphere), our life force begins to resonate with and potentially manifest the symptoms and state of mind of the chronic miasm of malaria. All miasms originate in an infectious disease, which may also become a genetic pattern that passes from one generation to the next. The characteristics of malaria are a hybrid between Psora and Tuberculosis, which are the miasms related to the early fall and early winter respectively.

Starting with the classic symptoms of a primary malarial infection, we see generalized aches and pains, weakness, and a number of gastrointestinal disturbances including diarrhea or vomiting. This symptom picture is partly reminiscent of the overall disturbance of the psora miasm, which also lies predominantly at the functional or more surface level. There is somewhat more intensity to the feeling in malaria, and it is a foreshadowing of the following miasm (tuberculosis) which displays quite a bit more charge than psora. 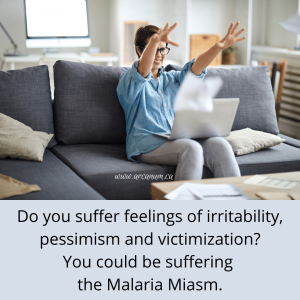 The state of mind of malaria is one of irritability, and to an even greater degree than in psora. It also surpasses psora in its degree of fatigue, as well as pessimism. The core feeling in malaria is of being victimized, which departs from psora’s feeling of simply not having enough (energy, time, money, etc.). In the classic infection of malaria, the typical carrier is the mosquito, and if you think of any time you’ve ever felt ‘bugged’ or even ‘victimized’ by mosquitos, then you will start to have a sense of this feeling in the malaria miasm. Malaria may feel overly sensitive, either physically or emotionally, and that their environment is hostile towards them. Both psora and malaria are diseases which primarily affect the warmth organism, and the patient suffering from these miasms will typically be very chilly.

Tagged on: photos, The malaria miasm, The victim state of mind