I make a clear distinction between the terms ‘vaccination’ and ‘immunization’. The first term refers to the specific methodology applied by conventional medicine (ie an injection of a modified form of a specific pathogen in an attempt to provoke a response by the immune system), while the second term has a broader and more general meaning which will relate to any method which may increase immunity of either a specific or general nature.  ‘Vaccination’, then, is only one specific example of ‘immunization’.

What does it mean to be ‘immune’, or to have ‘immunity’? The word is derived from the Latin word ‘immunis’, which referred to having an exemption from a public duty, such as paying taxes, or serving in the military. This relates to the same root word as ‘municipal’, which contains the implication of a duty, service, or payment which is due from a citizen for benefiting from the services of a city or state. I remember when I lived in Ottawa, where there are many embassies, and I would often see cars with red license plates which were indicative that this person held diplomatic immunity, and was therefore exempt from certain local laws.

The meaning, then, of ‘immunity’ in the context of our health, is to be free from our usual relationship with the kingdom of nature, to whom we are normally obliged to pay taxes in some form of sacrifice. The world of crude nature is made up of instincts of survival, predator-prey relationships, and the blind, impersonal spreading of disease through contagion. The outcome of contracting an acute infectious disease, for example, can result in a partial loss of one of our functions, such as partial hearing loss after surviving measles. Sometimes, the ultimate sacrifice of death will be the tax we pay to nature due to contracting such an infection. 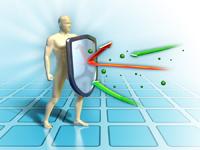 One of Dr. Hahnemann’s greatest condemnations of the conventional system of medicine (what he called “the old school”), is that their methods imitated this “crude” form of nature, and reproduced its taxation system in the form of “drug side effects”. Hahnemann’s system of medical Heilkunst, then, is built on the idea of using the laws of nature, but not in their crude or sacrificial form. Instead, the idea is to elevate them and apply them with a more refined method, which provides the benefit without having to pay a price in the process.

The word ‘immunize’ then, in its highest form, implies a form of treatment which does not demand a tax or sacrifice from the patient. Using homoprophylaxis (aka ‘homeopathic immunization’) is based on this concept of using a refined form of nature (ie a potentized medicine), rather than the crude form of conventional vaccination. While conventional medicine still uses the word ‘immunize’, it is not wholly accurate in doing so, as it is still imitating the sacrificial methods of crude nature with vaccination. Likewise, the ‘herd immunity’ promised by the mass vaccination program parallels the mass taxation approach of a municipality, who places its own wellbeing ahead of its individual citizens. Homoprophylaxis, and the methods of true immunization in general, work to liberate every individual into their own higher forms of health and expression, rather than as yet another branded member of the herd.

Tagged on: photos, What is true immunity?, Why homoprophylaxis is superior