No, this blog post is not about prostitution. The “sex economy” was how Dr. Reich referred to the internal economy of life energy within a person. Just like the economy in a country, where dollars flow along certain economic pathways, and may experience different forms of slowing down or contraction, so does the inner economy of a person’s life energy. In a state of health, our energy flows, and expresses itself in certain ways, and in a state of impaired health, the natural flow may become stagnant and create symptoms in certain areas.

I’m speaking of this concept in more general terms, but Reich originated this concept within his more specific observations around his patient’s health, and particularly with reference to whether their energy was being properly regulated, or not, through a regular healthy sexual discharge. Where it was not, this person’s “sex economy” would have to adapt, and find less healthy ways to express this undischarged energy. Reich’s initial study was with Freud, and therefore his focus began with such concepts as neurosis. Unlike Freud, though, Reich quickly came to realize that treatment wasn’t a matter of merely resolving the neurotic symptoms, but of resolving the entire “sex economy” of the patient. 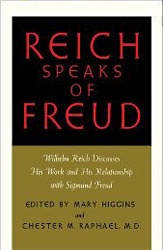 In other words, a patient may or may not display any particular neurotic symptoms, yet their entire structure takes on the job of re-routing any excess life energy. The passive feminine character type, for example, is the patient who behaves in a very compliant and pleasing way with their practitioner, yet this structure is actually a way of holding back a very deeply seated feeling of hatred, which may eventually leak out in small venomous doses.

Reich’s insight was that it was this character structure itself which needed to be attacked and dismantled, in order for the patient to have any true forward movement in their health. Without intervention, the character structure will tend to become more and more entrenched over time, as it acts to block a complete discharge of sexual energy, which means that even more energy is leftover, and will also need to be bound into the character structure. The entire scope of Heilkunst treatment is designed to systematically reverse this process of armoring and disease, and restore the highest state of health possible for each patient, and a fully self-regulated sex economy.

Tagged on: healthy sexual discharge, photos, the character structure and neurosis, the sex economy of the patient