Over this past weekend, Jeff and I watched, “Sexual Chronicles of a French Family” on Netflix. We both thoroughly enjoyed it. It spoke so much to my new book, “Sophie’s Truth: How A Young Girl Unfolded Her Essential Self Through Love.” It was about a shy, somewhat depressed, teenaged French boy who never smiled in his family’s annual portraits due to the fact that he’d never tasted from the fruits of love or intimacy like everyone else had. His frustration and anger becomes clearly symptomatic as Romain loses it while at a family gathering where all they discuss are mundane topics like sports. As a result of the anger not being properly discharged, he is caught masturbating in class on a dare from his friend and potential love interest, Coralie. His Mother on his behalf, starts a family anthropological dig into all the of member’s relationship to sex in order to examine what was formerly taboo. 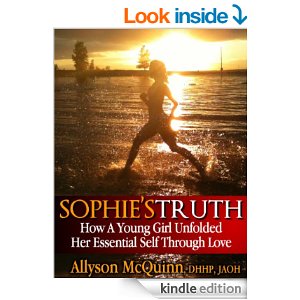 I loved the fact that the family embraced the opportunity to go to the root cause of Romain’s ills instead of reacting with the emotional plague reaction of fear or anger as we’re so privy to in our modern North American culture. There was no stuffing down of the issues of what every human being ultimately craves, love and intimacy. Even his father gifts our main character with condoms beside his bed and Romain is condoned to have sex in the family home in his own bedroom; a wonderful display of acceptance!

When the focus shifts from suppression to condonable, the movie depicts normal, healthy loving relationships between committed teens, the parents and even Romain’s grandfather. The audience also witnesses the voyeuristic tendencies of Pierre, Romain’s brother, a symptom more of the former suppressive forces. It is interesting as Bronislaw Malinowski illustrates in his book, “The Sexual Life of Savages” that the desire for multiple partners and pornography only came in after the Church arrived on the island where the Trobriander Islanders were permitted to have habitual carnal unions throughout their childhood and teenage years. As an emblem of healthy sexual unfoldment, these children and teenagers were built huts by the tribe specifically for multiple hour long unions. For whatever reason, these tribal kids never spontaneously chose multiple partners. Incidentally, Pierre is the only member of the family who is more closed-mouthed about his sexuality which may be more indicative of the former state of mind in the home dictated by the parents.

In the depiction of a very similar theme, I take my character Sophie through from the very anal construct of her suppressive home-life in maritime Canada, also to France to unfold herself more naturally in this more romantically-based culture. This natural backdrop provided just the contrast I needed as the setting for my character Sophie to realize her full potential as a sexual being which essentially becomes an artistic rendering of Dr. Reich’s full orgastic potency. From a therapeutic context, the audience really gets to participate firsthand the before and after effects of the similar, wholistic de-armoring process that Romain lives through over the course of a year through his sex. Like my own book, the last shot of Romain reveals precisely what the revelatory factor is in being able to explore sexual unions when an individual steps into his whole sexual self naturally. The fact that his family wholly supports this healthy, natural desire to know love is a considerable step-up from our typical North American morals and restrictive attitudes on sex which is probably why we have such burgeoning medical practices. Dr. Reich also wrote about how a sexual damning up produces neurosis, psychosis, armoring, cancer biopathies and other diseases.

All told, when the moralistic lid comes off in the movie, it was fascinating to see all the family’s lovers wholly accepted and embraced into the fold during family gatherings, celebrations and even a funeral. For me the mother is key in the way she sets the tone for the new unfolding of the spontaneous ardor that had laid hidden below the family’s consciousness until now. Romain clearly benefits from this new level of acceptance. No doubt that Dr. Wilhelm Reich, the father of the philosophy of true orgastic potency through natural love, would have applauded the Writers and Directors, Jean-Marc Barr, Lucy Allwood and Pascal Arnold, for “the Sexual Chronicles Of A French Family.” It is said that novels and film are often artistic representations of a reality to come in about 20 years. We can only hope, as then I will have the opportunity to realize Dr. Reich futility in his time as a celebration in mine.