Of the 38 Bach Flower Remedies, there are a handful which address different types of fears. Mimulus is the one which is used to address specific, known fears, including phobias, or other general aversions such as for public speaking. It is particularly called for when someone is lacking courage for doing something that they know they need to do. 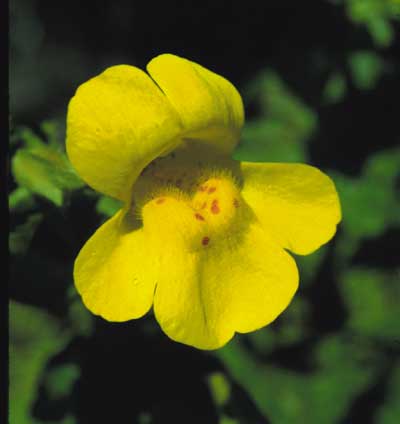 Mimulus is different from the essence of aspen, which is called for when there is a fear of unknown origin, and when the feeling overcomes the person, but they can’t tell you why they are feeling afraid or anxious. The origin of the fear or anxiety is always known when mimulus is called for.

I remember when I first started trying the Bach Flower Remedies, and I was using mimulus. I first started taking it when I was on a road trip, and apprehensive about some of what I would be doing at my destination. The interesting “side effect”, which really struck me, was that it also worked to remove my (then) characteristic shyness, and I spontaneously struck up conversations with strangers at the bus stop (which I never would have done before). The Bach Flower Remedies in general, and some of my first uses of them, including mimulus, were quite a vivid experience for me, and opened my mind to “energy medicine”, which later led me into studying homeopathy.

If you know anyone who is dealing with specific fears, such as phobias, public speaking anxiety, or other general performance anxiety issues, then they may get quite a bit of help from this remedy. I’m also thinking of all of the young men and women who will be headed to meet their boy/girlfriend’s parents for the first time during the holidays, which they may be quite nervous about. Tell them to start sipping on Mimulus before they get there, along with any other homeopathics specific to their state of mind.