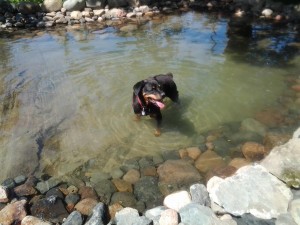 “In 2012 my eight year old Rottweiler, Rosie, got Lyme disease; I had had a vet remove the infecting tick and they had sent it away for testing. I didn’t want to just put my dog on drugs to manage the symptoms which they said would involve Rosie’s kidneys.
Also that year Rosie had to have porcupine quills removed at the vet and the anesthetic which should have worn off in a few hours kept her stupefied, laying on the kitchen floor for twelve hours. Rosie in her inability to move let loose a full bladder and just lay in it since I couldn’t move her and her ninety pounds.
I didn’t know what else to do for her until I met Allyson last winter 2014 and happened to mention that my dog had become incontinent.
Before Allyson started treating Rosie, I had noticed that my dog had started peeing more often and throughout the winter I could see pink drops in her urine. Later she would try to pee outside and squat a dozen times trying to relieve her bladder. She was also wetting her dog bed everynight.
My dog also had lost her zeal for walks and I had to coax her along on a leash even for a walk of less than a kilometre.

Allyson told me that Rosie’s peeing would probably get worse before it got better.  One day on a six km walk this summer, Rosie’s energy level having returned for exercise, she let out a pee that was mostly blood. Even though it was alarming to see what looked like an ounce or two of blood and pee coming from her, Rosie seemed happy and healthy; she didn’t look in pain or wince as if it had bothered her. She just kept on with the walk as if nothing had happened. After that I didn’t have to clean up another piddle in the house or wash her bedding every night anymore.
It’s been over a month now and friends who haven’t seen Rosie since the winter have commented that she looks and acts like a new dog  Not bad for a ten year old.

Thanks, Allyson, for your skill and care with animals.”

For More Testimonials and to Learn How To Use Natural Remedies for your Dog, Check out our Bestseller: 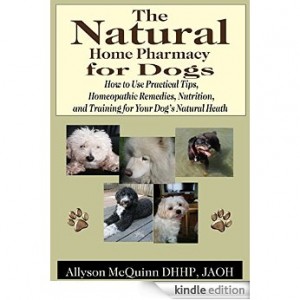