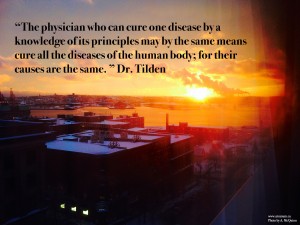 Please be warned of over-use of exclamation marks below … written by an enthusiastic Heilkünstler in touch with her inner 4 beat cycle!

The purely empirical mind has a tough time with this one. Our Jeff Korentayer, fellow Heilkünstler, describes some days as having gone through, “hand-to-hand combat with the intellect.”

The reason for this is because the intellect sees diseases all broken up into silos. This is the way the Allopathic system is designed with all of its different departments. The bone doctor, the heart doctor, the feelings doctor, the plumbing doctor, the skin doctor, the genital doctor, the bum doctor, etc.  This is anti-wholistic!  You’re not a car made up with disparate parts! Allopathy fits in with the same anti-pathic approached used with their anti-biotics (literally against life) and anti-histamines, anti-depressants and anti-inflammatories.  It is suppressive, or palliative at best; never a wholistic cure. You see it right?!

Think about it, you’re not broken up into a bunch of fragments are you? No, you’re a whole; a sum of all their parts!  Therefore, logically, if teeth and bone are part of the same physiological phenomenon, why then wouldn’t the Dentist, Osteopath, Podiatrist and Orthopaedist all confer together to address the underlying cause of your ills? The cause WILL inevitably be the same!  Makes sense right?!

You are a whole being, why then would you break yourself up into pieces to qualify for an anti-pathic system? Alternatives do precisely the same thing. Steven Decker, Romantic Science Scholar and translator of Dr. Hahnemann’s Organon,  calls the spectrum of alternative therapies, “Allopathy dressed up in chicken feathers!”

Patients will think it most evolved and great that they’ve converted their thinking by seeing the Chiropractor, Psychotherapist, Naturopath and Nutritionist. However, their silo thinking is just being applied using the same empirical gesture.

By using the same reasoning, rationalizing that all is well because it is natural and can’t cause harm is faulty at its underlying roots too. Cure is not obtained using the same anti-pathic reasoning for healative modalities. If your teeth and bones are still crumbling, the root cause has not been eradicated on sound, lawful, natural principles no matter how many natural therapies you apply.  We see this ALL the time!

Once you get it, it just makes rational sense. Right? Then what system of medicine offers the art and science for curing chronic disease based on this reasoning? Heilkunst literally means, the art and science (‘kunst’ in German) of wholing (‘heiling’ in German). So if you have tooth caries (cavities) AND scoliosis, they’re absolutely related. There is one underlying cause and there is one curative homeopathic remedy for it!

Don’t you deserve to know the underlying cause that is precipitating that pathic expression in your whole personhood and then have it treated outright with the single remedy that will annihilate the root cause (tonic disease)?!!! That’s what I thought. It makes sense right? No need to fragment or sacrifice yourself for either allopathy or alternative approaches as Dr. Tilden stated,” The Physician who can cure one disease by a knowledge of its principles may by its same means cure all the diseases of the human body; for their causes are the same.”

Now think of all those cadavers those medical students are still cutting up and sticking into jars of formaldehyde and ask me if you resemble remotely what is lying under their scalpel on that cold metal table?! This is the fundamental approach to teaching medicine. Are you dead? Nope?! Right, I didn’t think so. So why do folks line the office waiting rooms to get into see an officer whose study is based on dead science and cadavers? No, seriously I just want to know.

The right jurisdiction for allopathy is the emergency room, however, when you prescribe the same approach to chronic disease, it becomes a toxic fiasco. Ask a mother who’s child was poisoned by chemotherapy (true story) that has less than 3% efficacy and I will tell you that there was no respect for the whole living principle of that human being. It costs the parent between $350,000 and $1.2 million, though, paid to Big Pharma for that child to be sadly poisoned to death.

Also, don’t get me started on how many hours the Allopath has in the study of nutrition. When I graduated in 2004 from the Hahnemann College for Heilkunst, it was less than 4 hours. 4 measly hours!  The underpinnings of your health in that paradigm is a prescriptive debauchery.

You are a living, breathing miraculous being! Did you know that physics can’t even explain how you’re able to stand erect without falling over? Did you know that you’re being breathed? Try to stop! Did you know that the fact that you think and form speech and reason at all is a culmination of the most mind-blowing epistemological phenomenon imaginable? The fact that you can observe your own self-thinking blows the windows AND doors wide open on your whole human being-ness.  You’re a whole miracle!  You deserve to be treated as one.