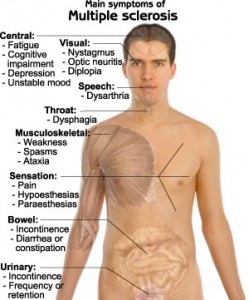 Do you know someone with MS? Did you know that they’re harbouring every childhood slight, resentment and undischarged bit of hatred and rage in their body?  They’re not properly threaded in the capacity to discharge their feelings.  Their literally a “nervous” wreck creating an abnormal hardening of the body tissue in an effort to “hang on” due to an excessive resistance to change.

Their issues are deep and karmic. The spasms and chronic inflammation are an indication of their armour‘s inability to let go. In technical terms, they’re ‘sympathetic storming’ and through Heilkunst treatment, we work to help them to let go of their stored up content and respect the parasympathetic state of wisdom and relaxation.  It isn’t easy as they’ve been postured in this gesture typically a long time.  Some have even been born in this contractive feedback loop.

Subconsciously, the MS patient has chosen to store up all that content and turn it in on themselves in a defiant act of self-martyrdom. The roots lie mostly in the Genetic Miasms Cancer, Syphilis and Lyme.  They will say things like, “I’m completely useless and worthless” for which the remedies Aurum and Lachesis will help to start lapping away at their deeper pathology.

Here’s Narayan Singh’s (aka Michael J. Lincoln) “Messages From The Body” on MS:

MULTIPLE SCLEROSIS (Loss of nerve endings, resulting in weakness and incoordination)
‘Wardening of the attitudes.” They are being forced to look at things they’ve never looked at

before, including past life stuff. They are having to live life for the moment, and to be crystal clear about

what they can have and what they can’t have. They have typically been highly oppressive and coercively

demanding in their pattern in past lives. They have a will of iron, and they are intensely inflexible, all of

which arises out of a generalized dread. They have taken on their situation with self-willed determination,

in a “true grit” response to the situation, leading to a “pit bull” stubbornness and to a “going down

fighting” approach. They have taken on a real mental hard-nosed and hard-headed approach. It is the

resultant of growing up in a rigidly patriarchal household.

“Exploitation-rage.” They feel like they have been forced to undertake hard physical work or

its equivalent in energy output against their will. They feel there is no support or assistance, and that they

have to sustain everyone all by themselves. They hate it, and they desperately want help and support.

They feel that they have exhausted themselves, and they really resent it. They feel alone and alienated,

and they are full of despair. They are in effect wreaking revenge upon those who never loved them.

Their family were exploitive and demanding, with little or no concern for their needs or welfare.

“Gotta take care of it myself!” They are into severe martyr-tripping, guilt-inducing and massive

control-tripping. They have a real “thing” about reforming and reforming things. They are very rigid

and moralistic, with a steel-reinforced value system and a fixed way of looking at the world and of doing

things. They are fearful that if they don’t take a personal hand in things, it will all go to hell in a bread

basket. They have a great deal of bottom line despair in response to their original severely dysfunctional

and judgmental family, in which they played the “hero(ine)-rescuer.” They were the “family hoist”,

and inflexibly disaster-deflection became their specialty.

“Self-straight-jacketing.” They are fearful of being free, and they are terrified of their true feelings. They are repressing their emotions, and they are therefore trapping themselves into immobilization and muscular atrophy. They are as a result unable to cope or to flow with change or to work in a co-creative and cooperative relationship with the world. They have then subsequently “selective electromagnetically” attracted and been attracted to overwhelming situations and relationships just like the original family’s scene. They therefore have a strong codependent “rescue trip” pattern which is now leading to a final denouement with regard to learning the lessons involved.

As mentioned in another blog, a person only has three possible outcomes when addressing a disease matrix : cure, suppression or palliation.  The bottom line is that you can work to cure it with Heilkunst Medicine or try to suppress it with drugs that cost about $15,000 – $20,000 per year.  It depends entirely on what your personal goals are as sussing out the root cause and coming to terms with the emotional and karmic aetiology is never easy, either.

6 thoughts on “Multiple Sclerosis; Stored Up Rage And Resentment From Childhood and Even Past Lives”