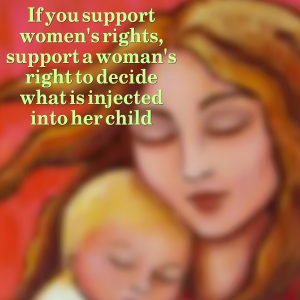 Synopsis: Our individual discernment is wholly intrinsically tied to our basic human rights under the dominion of God. Legally, this is far above the will of the State based historically on admiralty law. From the development of ovum cell combined with spirit, I chose this child to come into the world and he/she is entirely my responsibility physically, emotionally and spiritually until such time that they’re able to take their own health and sovereignty into their own hands. The States attempt to infringe on my God given discernment from the life-cycle of that life, from my own volitional and spiritual loins, will provoke an ire rarely witnessed in this earthly realm prior.

Overview: There is a universal hierarchy that is starting to be breached by chthonic (based on fear and ignorance) fascist states of mind in North America and even globally.  Certain States within the American Union are beginning to infringe on our individual human rights and freedoms under the dominion of God.  You may be asking, what happened to the celebration of life, liberty, and the pursuit of happiness in grace and freedom?  Empires in the past have fallen for precisely the same reasons, but it seems that patriarchal societies are destined to repeat history in a hideous karmic loop.  The tyranny of suppression reigns under these Luceferic beings.

The reason for this is the suppression of the wisdom of sophia; as in philo-sophy (literally Love of Knowledge).  This is the feminine impulse for gnostic, romantic gestures in nature that allow fully for nature to realize her intrinsic, natural, sexual, powerful self in the primal expression for the common good inherent in the GOOD (God) bestowed in each man and woman.  The Ahrimanic and Luceferic forces of the demiurge (Hell on earth) are pre-programmed to limit this full culmination of the realization of our human freedom as Christ-imbued etheric thinkers (as in the universal impulse and not the limited Christ of Churchianity).  It is a direct mirror of the hellish ethos required by each individual to struggle against in the obtaining of their intrinsic rights and freedoms under the dominion of the GOOD (God).

If  we’ve lost the essence of this bond with the Gnostic Mother Father in the unutterable silence,  the grace of the pleroma*, then we will experience the hard fall into mechanistic materialism and disease as prey.  It is up to us, as women (and righteous men), to step up into the fray of xenophobic governing entities (the incarnation of the gesture of  Pontius Pilate) and stand firmly for what is intrinsically right in the face of these threatening crucifixions.  The attempted erosion of our basic human rights and freedoms under the dominion of God is their first step in suppression.

Some good on-line resources for bolstering your individual human freedom might include:

The Philsophy of Freedom – http://philosophyoffreedom.org/files/POF_Wilson.pdf

The Lord Of The Rings – http://www.ae-lib.org.ua/texts-c/tolkien__the_lord_of_the_rings_1__en.htm

This list is by no means complete and will be added to over time.