I recall, once, about 20 years ago a sensation at the bottom of my spine.  What started as a generalized ill ease at my core, suddenly burst forth into what felt like a black cloak over my head trying to suffocate me.  I couldn’t breath, my eyes springing wide in terror.  I watched myself flail in horror as my heart thumped wildly in my chest, my mouth went dry and I sputtered and wheezed clinging to what felt were my last breaths.  In that moment I just knew that I was going to die.

As my pores poured forth a clammy, rank sweat, I smelled the beguiling essence of death on my skin.  I anxiously perceived that this was the end and my headstone flashed before my eyes, folks dressed in black appeared to be mourning my departure and a very insignificant obituary appeared in the back of the Sunday paper.  It was all there like a movie playing sequentially before my dread-filled eyes.

When I felt the black shroud threaten to close my wind pipe forever, I felt my body (and finally my mind) simply surrender.  It was a like the apex of the crescendo of terror finally peaked and I felt a far off floating feeling come to retrieve my beleaguered soul.  Was I swooning like an 18th century Jane Austen character?  As I crumbled to the ground, my knees hitting the tarmac of my apathy, I just let go.  A beacon of calm over took me and I let go to my inevitable demise as I hit the floor.  My funeral scene went black.

As my consciousness slowly re-booted, I could sense muzzy thoughts trickling back in.  While still prone on the floor, I felt that there was no more effecting my broken will required here, no need for all those lists that defined a hobbled success for me as a unfulfilled slave in a system that required my compliance.  In that moment, I realized that I’d become a doormat, a lackey in life’s machine of work, cooking for my husband, paying taxes and raising thankless kids.  As a result, I realized deep down, I was knee-bumping (literally) terrified that this was all there was to my fractured life.

It was a moment that I will never forget.  If I’d been a follower of Freud, and the descendants of his psychoanalytic society, he might say that I’d faced the death instinct with a certain aplomb and adroitness. Certainly, intellectually, it was clear that I’d hit up against the crux of my mortality. Any Psychotherapist with ink in his pen and a prescription pad would likely look at drugs to suppress this trip down the pipe of terror.  Some anti- this or anti-that to thwart my clearly “chemically” imbalanced brain.  Most patients of this model are happy if you just suppress and thwart their capacity to repeat this obvious “disorder” from gaining any patterned traction again.

However, I’m not a typical woman of the Freudian camp.  If you simply shut down the predisposition for me to know the gnarly essence of myself, you short circuit the potential for empowerment.  I wanted to own the reigns in my life, not be hobbled on the illusion of any drug.  It is still my modus operandi.  I’m no seemingly play now, pay later kind of gal.  I’m wired  to know the etiological roots of my suffering; to suss out the cause and predisposition for my episodes of panic wrought with asphyxiation.  Why was I being smothered? 1

When I began to study at the Hahnemann College for Heilkunst, I learned that Wilhelm Reich, once a favoured student of Freud’s, would cite that it was not death that I was actually instinctually scared of; it was life!  My organism had never learned how to live, out of grace, pleasure and the orgasm function.  If you want to re-read my panic attack story above, again, as if you’re reading a bit of erotica, you’ll see that if I was properly threaded, the function of the orgasm (big luscious expression of health and life) would actually follow the same biological path; tension, charge, discharge and then relaxation or realization.  Panic attacks are a severe distortion into fight/flight of the biological norm for genital primacy and then true orgastic potency.  If examined closely, in this vein, you’ll see that the gesture is in fact similar.

Most folks don’t even know that this biological function exists due to the fact that, just like I was, their stuck in genital primacy having clitoral climaxes or penile ejaculations which is really just an appetizer.  My former Mentor, Steven Decker would cite that a climax is really just  a “genital sneeze” isolated to the genitals necessary to training for the whole bodily event for the earth to move, the “grand mal seizure” version of true orgastic potency.  My neurotic intellect producing the panic attacks would need to undergo a re-training to discharge the fear and terror trapped below my armouring through the orgasm function; through pleasure, not pain. This was a serious upgrade from talk therapy and prescriptions. 2

Just as a child needs their fever function to help train them up biologically to their immune function for when something serious comes along, adults who’re not properly strung through their healthy sexual functioning will suffer panic attacks and disorders of this nature as an attempt to discharge fear and terror.  If not properly plumbed, the thwarted content will hit the armouring that causes the loop for panic to gain traction and momentum until the damn breaks causing symptoms like heart palpitations, sweaty palms,  irrational thoughts and suffocation.  The thwarted sexual expression is an attempt at the biological release of the damned up content below decks in your subconscious (nether man) at the core of your being clanging against your armouring and beliefs.  The secret mantra will be, “I can’t let go, I can’t let go, I can’t let go.”

The essence that animates you just sneers out of tough love with the opposite gesture, “Do you want to bet?” And suddenly your biological damned up mechanism trips the lights fantastic and you’re suddenly careening wilding up the side of the panic roller coaster to the trippy peak with lips mouthing unspoken terrors with lips turning blue as you fall to your knees in the ultimate gesture of supplication.  It is this hobbled curtsy of genuine genuflection in your swoon that is also attributed to the capacity for a healthy orgasm function.  3

Reich wrote, in his book, “The Function Of The Orgasm; Sex-economic Problems of Biological Energy,” that, “I came to consider the instinct as nothing more than the “motor aspect of pleasure.”” When I first fell upon these words, I felt something transcendent take root in my thoughts with regards to my own panic attacks.  Could it be that the answer to my issues did not have to have the temporary band-aid of yet another round of talk therapy and a prescription for drugs?  Could it be that by retraining my system from suffering to pleasure, I could release the pent up suffocative content at my core?  Did I feel I deserved to live this way?  That, right there, turned out to be the bigger question in my de-armouring process. 4 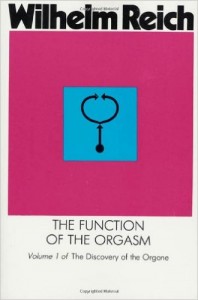 I began to learn that talk therapy only has the capacity to access content post-cognition.  This means that you have to have the recall to speak about your history to a point of memory to leverage the harboured dormant content.  What is your armouring took place between birth and age 3 or 4.  Did that mean you were biologically and psychologically screwed?  What if there was another way to get at that content where I didn’t have to engage in yet more years of verbiage with therapists mostly sicker than I was as I’d spent years in therapy, partially paid for by the State, to no avail and was poorer on many levels for it.

At the onset of 1924, Reich published a series of papers on the idea of “orgastic potency,” and the capacity to release blocked emotions from the musculature, losing oneself uninhibited to the orgasm.  This was the basic idea that Freud had come to call Reich’s “hobby horse,” or in German, “Steckenpferd.”  Reich had argued that psychic health and the ability to love fully, oneself and others, depended on the capacity for the full discharge of the libido, or true orgastic potency, “Sexual release in the sex act must correspond to the excitement which leads up to it. It is not just to fuck … not the embrace in itself, not the intercourse. It is the real emotional experience of the loss of your ego, of your whole spiritual self.” 5

In that moment, I was dumbfounded, this was the answer that I sought.  As I delved further into Reich’s other books, on cancer (also part of my former package of suffering, see footnote 1) and character analysis, I realized how and why the psychoanalytic community at the time became limited to talk therapy and prescriptions and why I chose to pursue a full out cure to my panic disorder and the myriad of my other sufferings I’d engendered over my lifetime.  I have the system of Heilkunst, and it’s predecessors like Reich, to bow down to now in genuine gratitude and healthy supplication.  As a result, I haven’t had a panic attack in over 20 years.

1  For more on this, “The Path To Cure; The Whole Art of Healing,”Arcanum Acres Publishing, McQuinn, Allyson, 2004 found in Amazon or for the latest 2015 audio podcast

2 For more on Wilhelm Reich and full orgastic potency , “Unfolding The Essential Self; From Rage To Orgastic Potency,” Arcanum Acres Publishing, McQuinn, Allyson, 2010

3 For more on the function of childhood fever and how to address it at home go to, “Natural Home Pharmacy For Children; How to Use Practical Tips, Homeopathic Remedies, Flower Essences, and Essential Oils for Everything from Fever to Tummy Aches,”  McQuinn, Allyson, Arcanum Acres Publishing, 2014 or this blog article by Jeff Korentayer: