I just recently attended a Womyn’s Summit with about 35 local birth-workers last weekend.  There were Doulas, Midwives, birth attendants, and even a native elder (Sister Morningstar) from Missouri who champions “hands off” births.  Sister told of a beautiful story where she was attending a birth with new Mom with a footling breach who’d just arrived at the hospital.  The babe’s foot was clearly dangling from Mom’s birth canal.  When the woman asked Sister Morningstar what to do, she simply replied,”Hang on to baby’s foot and relax.”  By the time the Emergency Medical team could be summoned, baby was already safely born into her Momma’s arms without the aid of any medical personnelle or even the interfering hands of her mid-wife.

When new Moms come to me in preparation for birth, I typically recommend that they view two movies, “The Business Of Being Born” and “Orgasmic Birth.”  The first one is about how our natural capacity for giving birth out of our own volition has been virtually hijacked by allopathic medicine producing the lowest rates of mortality as a result.  Orgasmic birth is all about remembering why we’re giving birth with our beloved partner and how to use love-making endorphins to ease the birthing Mom’s stress and discomfort in the comfort of her own home. 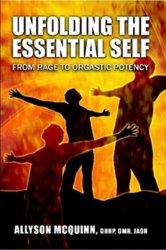 In my second book, “Unfolding The Essential Self,” I write about the principles of natural labour by telling my own birth story with regards to my daughter born just an easy 10 minutes after dilating.  This after, I was told that a VBAC (Vaginal Birth After C-Section) would not be possible after by son’s horrific birth chronicled here.  Here’s a good reason to consider having your baby naturally at home:

“In an industry where the mortality rate of babes born in hospitals is alarmingly high, especially in the U.S. (Canada comes in a sad second) and especially in babes of racial minorities, it can feel like we’re victims of a medical industry that does not wholly have our best interests, or that of our babies, at heart. The fact that expectant mothers become patients in gowns, encouraged to use a wheelchair and to lie in bed waiting to be put out of their misery with an epidural is thankfully now becoming a thing of the past. Until recently, the options were not so great. Did you know that all women in Canada receive up to eight different drugs (including Oxytocin in their IV drips or in a shot in their shoulder) to encourage contractions whether they want to or not? Most women have no clue that their bodies are being invaded with “poisons” in this way. Birth is not a disease, condition, or illness, and should not be treated as such, especially not without our consent!

Hypno-birthing, doulas, water births, successful breach deliveries, and mid-wives are all terms we women are now championing as we take the fundamental right back to have our babes in the way that is most resonant and congruent for each one of us. In an article written by Jennifer Griebenow on the safety of hospital births versus home births, she was shocked to learn that “a study in the Netherlands done in 1986 on women who were having their first babies showed these results: out of 41,861 women who delivered in the hospital, the perinatal mortality rate was 20.2/1,000. Of 15,031 women who delivered at home with a trained midwife, the rate was 1.5/1,000 (Kitzinger 44).” She goes on to say, “I know, I thought it must be a typo too.” Read it again if you need to. I had to, too!”

Jennifer Grebienow, Home Birth and Out-of-Hospital Birth: Is it Safe? How Safe is that Hospital Anyway?, http://www.gentlebirth.org/ronnie/homejjg.html

Sister Morningstar also shockingly reported that if 4 generations of women have C-sections, by the 5th, the DNA code for birthing naturally will be so altered that the woman’s body of that generation won’t even attempt a natural birth.  In effect, we’ll have de-programmed the body’s cellular memory for this normal biological function right out of our cellular matrix.  The hormones won’t even bother to step up on our behalf.  In fact, it takes a huge amount of concerted and conscious effort for a Mom to actually have a VBAC at all after a single C-Sectioned babe.

This wise woman went on to say that if we’re a culture bent on 100% life births then C-Sections should be championed, however, be aware of the inherent health risks of babes who’ve not had to fight their way through the birth canal to get here.  My own C-sectioned son suffered lung issues, severe colic, allergies, autism, severe behavioural issues and gut dysbiosis alone associated with his birth.  He also suffered the state of mind that everything be handed to him easily as this is what he’d learned to expect.   He could never play on his own, always expecting us to play with him.  He had very big issues with autonomy and struggle until Heilkunst Medicine.

As I’m writing this, I can’t help but think of the story of the Monarch butterfly:

“Once a little boy was playing outdoors and found a fascinating caterpillar. He carefully picked it up and took it home to show his mother. He asked his mother if he could keep it, and she said he could if he would take good care of it.  The little boy got a large jar from his mother and put plants to eat, and a stick to climb on, in the jar. Every day he watched the caterpillar and brought it new plants to eat.

One day the caterpillar climbed up the stick and started acting strangely. The boy worriedly called his mother who came and understood that the caterpillar was creating a cocoon. The mother explained to the boy how the caterpillar was going to go through a metamorphosis and become a butterfly. The little boy was thrilled to hear about the changes his caterpillar would go through. He watched every day, waiting for the butterfly to emerge. One day it happened, a small hole appeared in the cocoon and the butterfly started to struggle to come out.

At first the boy was excited, but soon he became concerned. The butterfly was struggling so hard to get out! It looked like it couldn’t break free! It looked desperate! It looked like it was making no progress! The boy was so concerned he decided to help. He ran to get scissors, and then walked back (because he had learned not to run with scissors…). He snipped the cocoon to make the hole bigger and the butterfly quickly emerged!

The butterfly spent the rest of its life crawling around with a swollen body and shrivelled wings.  It never was able to fly…

As the boy tried to figure out what had gone wrong his mother took him to talk to a scientist from a local college. He learned that the butterfly was SUPPOSED to struggle. In fact, the butterfly’s struggle to push its way through the tiny opening of the cocoon pushes the fluid out of its body and into its wings. Without the struggle, the butterfly would never, ever fly. The boy’s good intentions hurt the butterfly.” 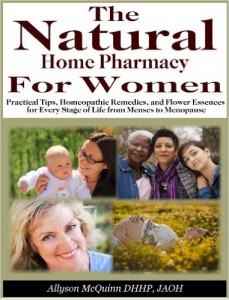 However, we can help Moms and babes birth more easily, without taking away the experience of having struggled into this world.  In Heilkunst terms, we call this leaving the realm of crude nature and harnessing the principles of refinement.  Here are just some of the remedies in alphabetical order from one of our newest books, “Natural Home Pharmacy for Women” to help you to easily give birth to your own babe, at home, in the company of your choosing, with as littler intervention as possible:

“Aconite napellus (Acon.) – For when you feel that you “may

die” and contractions feel like a runaway train and the intensity

is taking your breath away. This remedy can help to mitigate

fear and anxiety so that you don’t feel so restless and agitated.

bruised, sore, and beaten-up during labour. The individual in

this state does not want to be touched. It will help with any soft

tissue damage to the birth canal and perineum, and is one of

several remedies we use in our post-surgery complex.

Arsenicum album (Ars.) – is a chief remedy for anxiety,

restlessness, diarrhea, or vomiting. It is also helpful when mom

can’t let go of the reins and trust her doula or midwife. She may

losing control of her birth process, anxiously mired in the details.

on her own in an anxious state. This is the time to set up the

birthing pool with warm water and give Arsenicum, to help with

exhaustion and to ease with transition.

Bellis perennis (Bell-p.) – This is our choice for deep bruising

or deep tissue damage, beyond Arnica. It is useful when the

she needed to push too concertedly. This remedy is ideal in the

case of surgery or any fractures.”

You can tell that this is an important topic for me, personally, because I wrote yet a third book on the topic of birth. This book was born of both the womb and of the heart. It is an artistic piece, a piece wrought with feeling, including righteous anger. 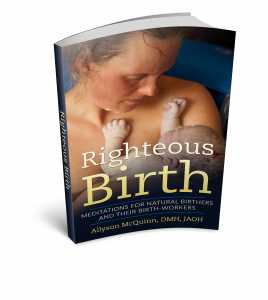 It is about reclaiming the right to birth where we want to on our own terms. For thousands of years, we’ve birthed at home, in creeks, and even mangers. We are not sick and we’re discovering that, clinically, our chosen sanctuaries are the safest places for us to give birth.

This collection of birth images and meditations are indeed a labour of love. It speaks to our fears, our struggles, messy birth, fast births, slow births, powerful births and births wrought with fear. All of the images are raw, honest and true. All of the stories are related to the truth but may be disguised to protect the birther wanting to remain anonymous. All of the images and meditations are depicted to help you to hold the course of your own natural or free birth. You will feel these birth-working women holding you through your own process from around the world!

What women are saying about this book:

Well done!!! I really love this work and would love to have it in my library. ~ Angee Hock, Traditional Midwife, Nebraska Birth Keeper

This book is so SO beautiful! Very very honoured to be included in the front quote! I can’t wait to recommend this to my clients. ~ Yolande Norris-Clark, Free Birth Advocate, freebirth.ca

Please let us know if we can be of service to your during your birth plan.  We’ve been Skyped in during a birth, and have even done hourly CoRe Bioresonance Feedback sessions to help with Mom’s state of mind during birth. We’re here if you feel that you need a hand or foot!

Tagged on: Heilkunst, Homeopathy, natural birth, Natural Home Pharmacy for Women, Orgasmic Birth, photos, The Business of Being Born, Unfolding The Essential Self