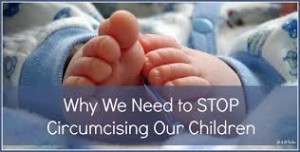 It is not right to mutilate the genitals of any human being.  It is a ruinous act designed to dull sensation in the male phallus so that he’s rendered more compliant by the standards set by religiosity and false authority.  There are no studies that can confirm that a circumcised male produces greater cleanliness.  These are myths that are ripe to be snipped from the landscape of our modern consciousness.

In this present day, even Judaism denounces the practice of Brit Milahs (ritual circumcision), given that eventually certain rituals run out of justification.  Heck, even women can now be ordained as rabbis.  If you hear a Jew, or anyone else, stating that ritual circumcision is justified on the basis of tradition, perhaps point out that the following are also “traditions” and were considered crimes, some punishable by death, according to the Torah (the first 5 books shared by the Christian Bible): 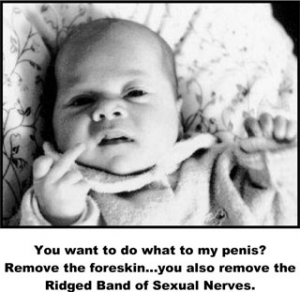 Evolution is a function of human development and our basic human rights, not to cause harm, are inherent to our dominion under God; especially if it involves our physical, mental, and spiritual bodies.  As educated and enlightened beings, it is our right to defend our perfect babies against medical or religious interventions if we feel that they are in contraindication to their health and well-being.  In a deep state of reference for what is holy (and whole) in my child, I exercise my full liberty to protect both my son and daughter from interventions that are not congruent to their health or well-being. In fact, if you look at the top 10 Values of Judaism, you will realize that circumcision violates 90% of them: 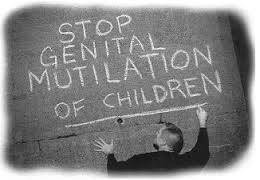 “Similarly with regard to circumcision, one of the reasons for it is, in my opinion, the wish to bring about a decrease in sexual intercourse and a weakening of the organ in question, so that this activity be diminished and the organ be in as quiet a state as possible. It has been thought that circumcision perfects what is defective congenitally. This gave the possibility to everyone to raise an objection and to say: How can natural things be defective so that they need to be perfected from outside, all the more because we know how useful the foreskin is for that member? In fact this commandment has not been prescribed with a view to perfecting what is defective congenitally, but to perfecting what is defective morally. The bodily pain caused to that member is the real purpose of circumcision. None of the activities necessary for the preservation of the individual is harmed thereby, nor is procreation rendered impossible, but violent concupiscence and lust that goes beyond what is needed are diminished. The fact that circumcision weakens the faculty of sexual excitement and sometimes perhaps diminishes the pleasure is indubitable. For if at birth this member has been made to bleed and has had its covering taken away from it, it must indubitably be weakened. The Sages, may their memory be blessed, have explicitly stated: It is hard for a woman with whom an uncircumcised man has had sexual intercourse to separate from him. In my opinion this is the strongest of the reasons for circumcision.”

“This class of commandments also includes the prohibition against mutilating the sexual organs of all the males of animals, which is based on the principle of righteous statutes and judgments, I mean the principle of keeping the mean in all matters; sexual intercourse should neither be excessively indulged, as we have mentioned, nor wholly abolished. Did He not command and say: Be fruitful and multiply? Accordingly this organ is weakened by means of circumcision, but not extirpated through excision. What is natural is left according to nature, but measures are taken against excess. He that is wounded in the stones or hath his privy member cut off is forbidden to marry a woman of Israel, for such cohabitation would be perverted and aimless. Such a marriage would likewise be a stumbling block for the woman and for him who seeks her out. This is very clear. Source: THE GUIDE TO THE PERPLEXED, Maimonides, Moses, translated by Shlomo Pines. (University of Chicago, 1963) The whole basis for the bris is actually halachically forbidden; which means that it is clearly against the fundamentals of Jewish Law.  It no longer should inform our behaviours towards our healthy, intact, sons whether we identify as Jewish or not.  It is our job to preserve the sanctity of each human life, especially for those who trust us not to betray that trust.  As a mother who feels inordinate guilt for allowing the bris to take place on my own son, in my own home, I repent deeply for this travesty upon my beautiful son. Even though, I fought against the rabbi and my in-laws, knowing instinctively, that strapping my son down to a board to have his genitals cut went against what I felt was right, I was weak in the face of their pressure.  I asked that given his prematurity that the procedure be delayed for 6 weeks after birth and that he be brought to me immediately after to sooth and nurse him.  If I’d only had the knowledge that Halaka (Jewish Law) dictates that since there is a danger to the babe’s life, medically hazardous procedures are strictly forbidden taking precedence over all else.  My son had been born 2 months premature, I would have had plenty of justification in light of the information researched for this article. “It is a violation of Torah commandments to physically assault or harm another person (Exodus 21:18-27). Yet that is exactly what circumcision is! Thus, it is against the most fundamental concept of Jewish law.” 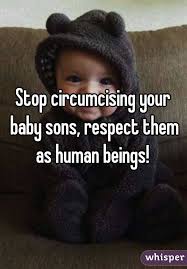 Can you imagine that some Jews barbarously object to pain medication by the physician; but can you imagine 4 needles with anaesthetic injected into your genitals isn’t painless?  Also, coating the babe’s lips in wine is no justification for this inhuman act.  I feel guilty and angry at myself for allowing the coercion to take place over 21 years ago.  I was a shut down, needy, woman who was silently mistaken for wanting to be a dutiful tribal member. My daughter had a very civilized baby naming ceremony.  We had chocolate cake, we wrote poems in her honour.  It was a ceremony orchestrated by women for the promise of a baby who’d one day become a woman.  My son deserved the same ease, and promise for grace and full orgastic potency; not a shock that caused him to writhe in mistrust and terror against straps that restricted his freedom of movement.  When we clear the event on many timelines, of the males we serve, their penis will break out with an angry rash.  No wonder! Some people will say that if you’re against circumcision, you’re anti-semitic.  Far from it.  In fact, this is a ridiculous notion.  I studied for almost 10 years to become a Jew, as a result, my children are Jewish, I’m married to a Jew and I identify with the persecution of any people who’ve suffered at the hands of any false authority.  I’ve been treated with nothing but grace and respect by members of my chosen Jewish tribe, however, in pursuit of higher education where I was taught to question everything, I question this.  Part of my own enlightenment and conscious maturity means that I reject many of the barbarous practices illustrated in the Torah. For example if 90% of African Americans chose to smoke and I was against smoking, it doesn’t mean that I’m against black people.  It means that I’m against the behaviour, not the race.  I am not remotely racist as a result. As one fellow enlightened Jew wrote, “Jews are smart. We are 1/3 of 1% of the population, yet we hold 33% of the Nobel prizes. This means that we are smart enough to understand that sexually mutilating our boys’ genitals is NOT acceptable.”  It is time to forgive ourselves and move on.  My hope is that any future grandsons of mine remain intact, breaking the cycle of pain and sexual compromise.  I will do my best to educate my daughter and my son.”

CIRCUMCISION: THEN AND NOW By: James E. Peron, Ed.D. Questioning Circumcision, A Jewish Perspective By: Ronald Goldman, Ph.D. Covenant of Blood By: Lawrence A Hoffman

If You’re A More Visual Learner: