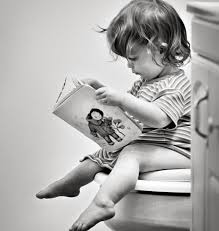 Most folks don’t know this but if a child is potty trained under duress, it can cause a whole host of mental/emotional issues later on.  Holding the breath, contacting muscles, unexplainable fears and terrors later on are some of the negative effects of forced potty training.  It is best if you can allow your child to self-initiate this process naturally as much as possible.  I knew an awesome caregiver who allowed all the little boys in her care to pee outside or in a big aluminum juice can set in the middle of the kitchen.  Most of them would be running around freely, naked from the waist down and they loved the sound their urine stream would make on the sides of the juice can.  She would praise them lovingly for a joy that they already owned for their accomplishment.

Kids don’t moralize that “pee or poo” is considered dirty, bad or awful.  In fact they don’t have the maturity of the ego to understand why something that was naturally inside their body, part of them, is suddenly deemed yucky just because it is now in a diaper, in the tub or on the floor.  The best parents I know don’t shove their limited way of looking at the world onto their babes prematurely.  Kids work on the model of “ownership” and success so it is best if you can make this a win-win process for them as it will pay off in the long run.

If you get down on your hands and knees and imagine what it would be like to be a sixth of your present size and what it would be like to fall into the toilet, potentially not being able to get out, you’ll be off to the store to buy a suitable potty.  Babes do best if they are permitted to wander and explore at their own pace around their own potty.  Allow them to follow both parents into the washroom when you have to go, too.  Special books with images of little kids making “poo poo” or “pee pee” in the potty can have a wonderful effect on cultivating the idea in your child.  Allow them to choose whether or not the book resonates with them, as this is a safe indication of whether or not they are ready for the idea.  If they seem inclined to sit on the potty while reading to themselves or while watching a favorite movie, provide them with praise and loving attentions such as, “What a big boy you are!  Good job, buddy!” It is a mighty big decision for a child to separate from their own urine or stool.  We rarely understand the magnitude of this decision. A consistent approach between the parents and caregivers is crucial.

If things are not going well and you suspect your caregiver may be forcing the issue, you will notice potty training anxiety such as:

I was shocked and upset to see my own son spontaneous stop using the potty after a DPTP (Diptheria, Polio, Tetanus, and Pertussis) shot.  He would go behind a large plant in the hall screaming out, “Don’t look at me!”  He would clench every muscle in his body, which seemed very counter-productive to the aim, as he attempted to “hold on” to his excrement.  Although he was wearing a pull-up and encouraged to “let go” using any means that pleased him, it was the beginning of a nightmare so extreme that he was hospitalized 7 times for constipation, once being put under general anaesthetic to have the impacted stool manually removed.  Later my son was labelled as “ADD” and then “Autistic.”  Thankfully, we were able to resolve the underlying cause with a systematic approach called Heilkunst medicine.  At the time of writing this, he is a thriving 21 year old man without an ounce of residue from this nightmare we lived when he was just a babe.