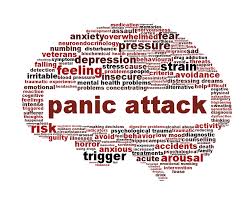 If you’ve located this site on the Internet, it may be to discern if you qualify for panic attacks treatment.  You’ve come to the right place.   First of all, we would like to extend our warmth and compassion to you as suffering panic attacks can be devastating.  This is not an easy place to find yourself in and we are hoping that the description of each of the escalating symptoms below helps alleviate your anxiety and fears by replacing them with knowledge and self-acceptance.  We’ve also suffered acute panic attacks symptoms ourselves and in the resolution of our suffering, we offer not just a description of the symptoms but if you follow the links to our other related sites, we’ll also help educate you on principled solutions that may resonant with you.  Just know that there are long-term solutions that don’t require a whole host of drugs or protocols that can cause you harm.

The good thing to note is that while profoundly uncomfortable, acute panic attacks are generally just that, “acute;” short-lived and while severe in effect at the time, the longest the effects can last is about 10-20 minutes.  While this may be little comfort while in the throes of an acute panic attack, at least it isn’t chronic inflammation of a joint lasting weeks or even months requiring long-term management or surgery.  Acute panic attacks can be easily resolvable with principled panic attacks treatment.  While panic attacks can have a sudden onset, which is what most folk find so destabilizing, they generally run their course in short order.

Panic attacks can come out of anywhere and are usually the polarity of trying to control the “uncontrollable” in our lives.  I suffered several of these bouts myself en route to my in-laws before my marriage to my first husband.  His family was orthodox Jewish and I was orphaned with little religious construct and I was being strongly advised to convert over a lengthy three years.  I felt, unaccepted for my natural self and inundated with criticism.  Over time these fears of being un-loved and accepted for who I was worsened. You may be able to sympathize with the psychic cause of my panic attacks which materialized for me physically as suffocating asthma attacks.  I felt that I had little room to breath.  I perceived that I was given no choice in the matter.  If I chose not to convert, my fiance would be forced to leave me.  It was awful. 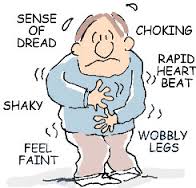 Most folks, like myself, become filled with dread and worry regarding the onset of the next panic attack.  This state of vexation, fear and anxiety can be enough to provoke the fright or flight state of an acute panic attack.  In either the absence or presence of physical symptoms, the person can start to feel prey to their psychological stress, uneasiness and dread.  Emotional discomfort may start to appear as distress, mild phobias around the next attack or even hypochondria; a deprivation of emotional ease.

Over time, the acute spikes of panic attacks may become anticipatory anxiety which is a multi-system response on the level of your central nervous system that begins to hold the body in a tightly wound sympathetic state.  It may feel like you are too tightly wound, perceiving innocuous stimulus like the phone ringing as a perceived threat.  This contracted state will loop in fright or flight without the ability to let go spiritually, emotionally or physically into a desired state of relaxation defined as a more parasympathetic state.  Eventually the adrenals suffer exhaustion from pumping adrenaline into the system because your mind is telling your body that there is a lion bearing down on it, even though your innocent house-cat may have just hopped onto your bed in the night. 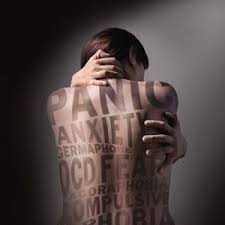 Folks suffering anticipatory anxiety over a period of time may begin to suffer mental or nervous breakdowns as the adrenals throw up major white flags of distress.  The individual can feel a constant sense of foreboding as if he is dying, going crazy or that he is destined for a sojourn at “Shady Acres.”  This is a frightening state to find yourself in as your behavior will feel inappropriate to relatively benign stimulus, you’ll generally stop trusting your inner intuition and wisdom, suffering depression and avoiding people, work or situations that may provoke anxious feelings.  We’ve worked with folk who have sadly become “shut-ins” due to the deleterious effects of long-term panic attacks.  Thankfully, they’ve been able to resume normal lives.

Over time, you may notice that the emotional aspects of your suffering show up more and more on the physical level of your being.  Feeling faint from a temporary lack of oxygen in the brain due to a temporary constriction in the breathing apparatus, nausea, or numbness can be symptoms qualifying you for panic attacks treatment.  Alternatively, some individuals will suffer the opposite symptoms such as heavy breathing or even hyperventilation, which is abnormally fast or deep respiration, which results in the loss of carbon dioxide from the blood, thereby causing a fall in blood pressure, tingling of the extremities, and sometimes fainting.

If your breathing does shift into this mode, if you feel faint, or your vision begins to tunnel to an extremely narrow point of view, it is best to sit down in a chair or on the floor with your head between your knees.  If you do faint, it is best not to topple from a standing position, hitting your head on the way down, so try to get down safely to a low position at the earliest onset.  On occasion, you may have the urge to strike out or flee which is just your instinct to flight or fright where your bodily resources funnel into your limbs, away from the more noble organs, in an attempt to safely try to eliminate the adversary or run like the dickens to get away from it. 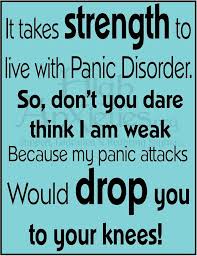 Your body is an amazing system releasing bursts of adrenaline, increasing heart rate, arterial blood pressure, upping blood glucose levels all spawned by your sympathetic nervous system’s response to stress.  It is truly amazing when you think about the dynamic nature of the panic attack and what your body has to go through in it’s efforts to protect you.  Some folks will also report heart palpitations, tightness in the chest, asthma attacks, and then trembling all over the body as the panic attack ebbs.  You may also notice burning sensations with a quick burst of heat, uncontrollable sweating, hot flashes and then cold chills as the body restores normalcy, releasing the flow of adrenaline.  The body will temporarily short circuit it’s thermostat in an effort to pump you up for the impending sprint or wrestling match with that perceived lion and then try to restore equilibrium once the threat has disappeared.

The other aspect to effective panic attacks treatment is to restore your capacity to think and feel clearly.  Otherwise, in the face of acute panic attacks you can feel impotent of your inner fear and terror to make any decisions emotionally or mentally until you’ve resolved your state.  During an acute episode, your thinking may become muddled, confused and your feelings jumbled, like a very undesirable orgasm.  The trick is how to use the pleasurable orgasm function to discharge the “little-kid” fears and terrors that provokes your panic attacks in the first place.  You may only be noticing symptoms now, but in our experience, the situation has been mounting for longer than your perception of them allows for.

A Heilkunst trained Physician is an experienced therapist trained in emotional release, preventing the symptoms of panic attacks.  Also, you’ll be armed with an Emotional Support Dropper, filled with natural homeopathic remedies that have no capacity to harm.  Folks tell us that their sequential therapy sessions feel like productive emotional midwifery helping them to birth the negative emotions allowing for the blessed release into healthy reflection, complete relaxation and restorative rest.

The Anatomy of Panic Attacks

sudden onset – In medicine, the first appearance of the signs or symptoms of an illness

fear and anxiety – root meaning of the word anxiety is ‘to vex or trouble’; in either the absence or presence of psychological stress, anxiety can create feelings of fear, worry, uneasiness and dread.

discomfort – an inconvenience, distress, or mild pain, something that disturbs or deprives of ease

a sense of dying, going crazy, or having a nervous breakdown – Mental breakdown (also known as a nervous breakdown) is a non-medical term used to describe an acute, time-limited phase of a specific disorder that presents primarily with features of depression or anxiety.

numbness – Deprived of the power to feel or move normally

heavy breathing or hyperventilation – Abnormally fast or deep respiration, which results in the loss of carbon dioxide from the blood, thereby causing a fall in blood pressure, tingling of the extremities, and sometimes fainting.

tunnel vision – Vision in which the visual field is severely constricted, as from within a tunnel looking out. An extremely narrow point of view

fight or flight response – A set of physiological changes, such as increases in heart rate, arterial blood pressure, and blood glucose, initiated by the sympathetic nervous system to mobilize body systems in response to stress.

burst of adrenaline – a sudden burst of energy from an increase in the hormone and neurotransmitter adrenaline, esp. increased heart rate and blood pressure, perspiration, blood sugar, and metabolism

trembling – To shake involuntarily, as from excitement or anger; quake. To feel fear or anxiety. To vibrate or quiver

shortness of breath – Shortness of breath, or dyspnea, is a feeling of difficult or labored breathing that is out of proportion to the patient’s level of physical activity. It is a symptom of a variety of different diseases or disorders and may be either acute or chronic.

heart palpitations – Palpitations are heartbeat sensations that feel like your heart is pounding or racing.

chest tightness – This is one of the main symptoms of asthma. Chest tightness is often described as a feeling of ‘congestion’ in the chest or a heaviness. Less commonly it can be felt as chest pain.

hot or cold flashes –The more your anxiety rises the more sweaty and hot you feel. The adrenalin rush is a factor as well. With the increase of anxiety you become pumped up just like you were running in a race. Your heart rate may increase. Your brain is in overdrive, causing the sweating. Cold flashes sometimes appear more after the panic attack. The sudden rushes of anxiety causes the sweatiness, and by calming down you may feel cold, and have chilling feelings overcome you.

sweating – To excrete perspiration through the pores in the skin; perspire.