It would be easy to tout facts such as 80% of sedentary American adults watch 3.5 hours of television a day. I could also describe how 92% of all Americans have a television set in their home which consumes more than half of their available leisure time. These facts are fairly well known.

However, a study done at the National Cancer Institute where 221,000 active individuals between the ages of 40-71 years of age still showed a predisposition to heart disease and cancer where T.V. was a 3-4 hour daily habit. This may not be such common knowledge. Also, did you know that chronic television watching is linked to incidences of  diabetes, obesity, influenza/pneumonia, Parkinson’s and liver issues as well?

Now, if I open the pages of Michael J. Lincoln’s book, “Messages From The Body” and review the reasons for a few of these diseases cited above, you might perceive the link to how watching television precipitates the state of mind before the disease manifests on the physical level. Here are excerpts from Lincoln’s book from each section specified:

Our predecessor, Rudolf Steiner, was a Goethean scientist who spoke liberally about stages of development in seven year cycles. He cited that when a child is first born, they’re most focused on physical development. It takes a lot of internal, mineral, forces to grow a body from its total dependency on Mom and Dad to be able to first sit, then crawl, run and then at 50-70 pounds at age 7, dribble a basketball with any kind of coordination.

From the ages of  7-14, Steiner speaks to how we are more etherically developing our capacity to receive impressions. This is the time in our development when we’re naturally and resonantly ready to be engaged more with art, story (fairy tales and putting on plays), music, eurythmy (a type of rhythmical, dance-like movement mostly found in Waldorf Schools), creativity (watercolors, drawing, sculpting, etc.), hand-work (knitting for metabolic limb coordination), sport (healthy competition) and fully actuating our imaginal forces through the etheric body. 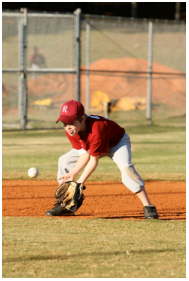 From 14 to 21 we develop our astral bodies through actualizing our desires, goals, dreams through fantasy and socialization. This is when we experience the onset of puberty and hopefully a healthy unfolding of our sexuality. However, “Waldorf educators saw a direct link to this astral body and the watching of television. The scenes, the lack of imagination involved, and the topics covered on most channels would obviously bring on the astral stage of the body at an early age from the outside in. This was one reason that television was banned from Waldorf schools. Modern researchers, however, have just recently made this connection when they recently announced, “Watching Television may Quicken the Onset of Puberty” (Dr. Laura Markham, 2006).

In Markham’s article, based on 35 different research studies she states that this connection has a lot to do with the hormone melatonin. Melatonin is a hormone produced by the pineal gland in the brain, which plays a key role in regulating the body’s internal clock. Light emitted by television screens suppresses melatonin levels in the blood, which disrupts sleep patterns of children and teens as well as the age at which they enter puberty. It is also interesting to note that the problems of early-onset puberty have baffled researchers since 1950. This was the same date in which televisions became widely owned in the United States.”

On one Waldorf school website from Ireland they state, “Television, as well as film, videos, DVDs, recorded music, computers and electronic games have a very powerful effect on children. It can take several days for the effects of a single video to wear off. If children are watching every day, the effects never wear off at all; many children now speak a lot of the time in ‘cartoon’ voices, make ‘sound effects’ to accompany their jerky movements (kicking, punching) and compulsively repeat lines from videos they have seen over and over again. This is now seen as normal childish behavior, but it really comes from these media, not from the children themselves.”  I once served an Autistic child who could “script” word for word every Disney movie she’d ever seen!

The other consideration is that we need time in order to process impressions as our thoughts go through a cycle of maturation. Watching television inhibits this natural process. Steiner stated that, “What is learned more slowly at any given age is more surely and healthily absorbed by the organism, than what is crammed into it.” (Spiritual Ground for Education by Rudolf Steiner).

This is also why homework is not promoted in Waldorf education, to give ample time for a child to wholly integrate all of the art, story, plays, music, and movement they were engaged with from the inside out to settle down into their etheric mind (where memory is stored) during the remainder of waking consciousness into the sleep consciousness. 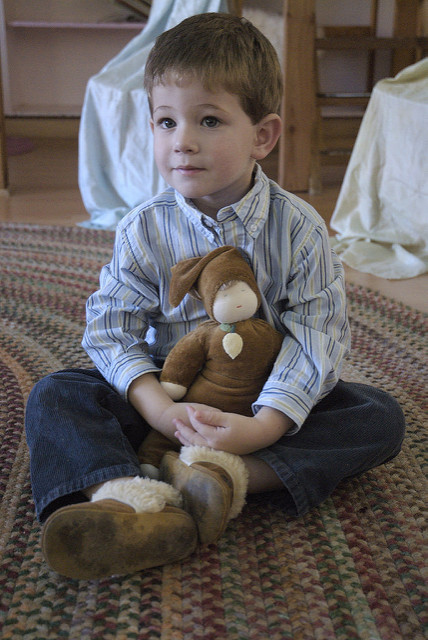 “Noam and his lemon-baby doll” by Michael Radwin

They will wake the next day full of reflections from the day before, having crystallized their impressions into thoughts. Children become sick, first mentally and then physically if this natural rhythm is not allowed for, given that the externalized impressions will override this capacity for thinking. The child’s head, instead, will be filled with images from video games or television. Once again, his own concentration and imagination will have been denied him. He’ll deem that life occurs, out there in T.V. land, not internally in his own world of self-actualized and fructified dreams. The application of a properly threaded Will (male gesture) and Wisdom (female gesture) will be hobbled.

The other problem is that if we’re told at allopathic schools that there is little room for the bubbling up of our internal creativity and that we have to succumb to standardized testing instead, we will begin to feel the light go out on our internal capacity for imagination and freedom of expression. A generalized malaise, and “why bother” attitude starts to show up. It might even lead to suicidal depression in our teens. I know because I serve teens brought to me for Heilkunst Treatment in this state more often than I’d like.

These external dumbing down forces start to spread into the rest of our lives. The why bother gesture begins to permeate everything to the point where a sufferer opts to live externally, watching others live, fulfilling lives through their externalized perpetual fantasies, while the watcher sits on the sidelines and simply watches or controls a gaming console. It becomes a lot less risky to live life on the sidelines physically, mentally, emotionally and spiritually if we’ve repeatedly gotten the message that what we’d like to contribute is not wholly valued.

I serve so many of these checked out children and adults, that it is astounding. It is an Aurum (homeopathic rx for the loss of one’s inner gold) state, in which they’ve forgotten their inner value. They’re not connected to their true heart’s desire (heart disease) and their lives feel profoundly un-lived (cancer). In many cases, they don’t even know what they’d like to be anymore, either in the present, or later on when they grow up, as they’ve not even thought to ask themselves this question anymore. They’re utterly resigned. T.V. perpetuates dissociation, escapism, a disengaged onlooker society. The video game and pornography industry is also counting on this physical, mental and emotional inertia of the watcher on the living room couch with his bag of cookies or chips.

Onlookers over time are numb, shut-down and not very resourceful. Perfect if the government, in cahoots with Big Pharma, want to be passing bills for mandatory vaccinations through congress without folks knowing or caring. No, you won’t see that on CNN or allopathic news. That content is only peppered liberally through my personal Twitter stream where my ire is completely provoked to write books and articles about this insidious phenomenon. #vaxxed #cdcwhistleblower  Sometimes I actually wonder if there is still anybody out there?!

In Heilkunst Medicine, we also discuss at length a Chthonic, fear-induced state entitled Bufo. In nature, Bufo Rana is a big, meaty, overgrown toad with big slobbery lips and a quick tongue. He sits  for hours, unmoving, staring at a fixed point in his environment, barely blinking waiting for a juicy fly to pass by, otherwise he is sedentary, conserving his cold reptilian energy, seemingly unaffected by his ambient. In the human disease state, you’ll observe these characteristics in addition to symptoms of lasciviousness, lewdness, lustfulness, and wantonness. They’re almost drooling as they can’t wait to get home to watch pornography and attempt self-gratification in the basest of ways in private. I’ve served many modern men, and women too, in chronic Bufo states.

I’ve also known two men in my life who were chronic T.V. watchers. One of them watched the news on a popular station from sun-up to sundown. He also developed a tumor the size of a grapefruit in his gut, breaking one of his ribs. He never knew it was there until Doctors noticed it while examining him for a hernia.

A second individual I know retired some years ago and watches a variety of sitcoms, news and documentaries day in and day out. He leaves his house on a very limited basis, living mostly in fear of the outside world. He takes a variety of drugs for depression and anxiety. His pallor is ashen. I can’t help but wonder if his chronic television watching is contributing to his problems.

I also serve individuals who have chronic problems with memory. They have difficulty recalling where they put their keys, issues with dates, times, people’s names, etc. Again, it would be interesting to wean them from television, in addition to Heilkunst Treatment, and see if their etheric memory increases. 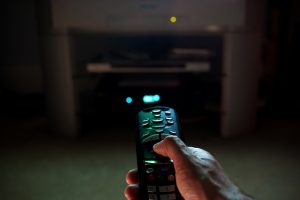 As you can see, television is a toxic, mind-numbing and disease inducing machine. It infects you and your family with its agenda, which represents less than 1% of reality. If you travel the real world, as I do, you’ll realize that 99% of the population is so loving, helpful and compassionate, perhaps you too will forget the violence and fear proffered by television.

I’ve not had television in my midst for over twenty years for the precise reasons that I’ve illustrated above. Living without it means that I get to live my own creative, thought-provoking and imaginative life, full of juicy impressions and healthy desires. I’m a photographer, an artist, a romantic scientist and a philosopher. I get to write books, serve patients and compose blog articles based on my own generative impressions, fully taking the time to ruminate upon ideas as they crystallize into articles. I love my over-the-moon fulfilling life and I feel that T.V. would only detract from desire to know myself and others in a deep and meaningful way. 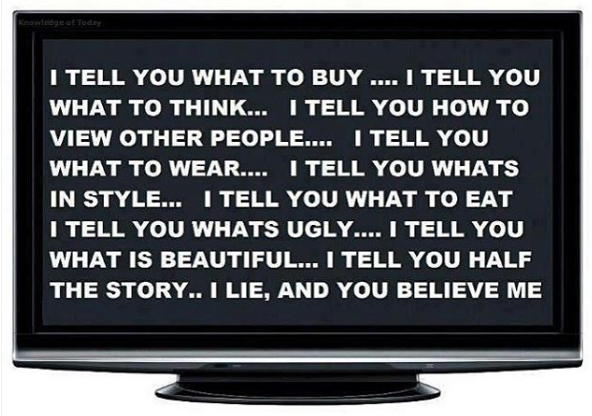 What Did Steiner Say about Television?