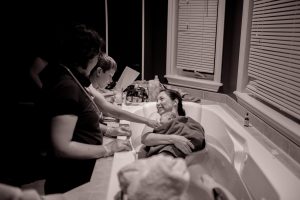 Our baby, Seamus is our “opps baby”. The pregnancy was a bit of a surprise since we weren’t trying and both of us are 44.  We both have been in treatment with our Heikunstler (and I am a Heilkunstler in training) for over 15 years, eat organic and try to live a healthy lifestyle so getting pregnant easily should have been no surprise since fertility and health go hand in hand.

My pregnancy was routine and uneventful and I did remain active throughout it – down hilled skied until I was 20 weeks, biked until 30 weeks and hiked until 35 weeks, this was on top of taking care of my two other boys (13 and 8 yr olds) and a female Newfoundland puppy. My last baby was born at home, and I planned a home birth for Seamus as well.

I went overdue, a new experience for me as both of my other boys were born at 39 weeks. As I approached 41 weeks with an OP position (posterior) I started taking homeopathic remedies to help turn my baby, along with seeing my acupuncturist and chiropractor. My labour started (literally) with a splash when my water broke all over our family room floor at 10:30 pm on a warm summer night. I called out to Doug but he was putting our youngest to bed and didn’t hear me, so my oldest son, told him my water had broke and I needed some towels. He ran downstairs with our “good” tow 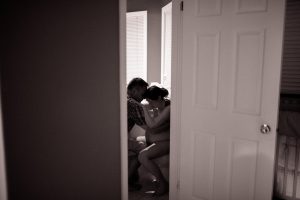 els which I refused to use and frustrated him since he wasn’t concerned about what towels we used – he did go up and get different towels. He seemed more panicked than I expected and when I asked him what was going on, he replied that the last time my water broke, I had delivered within 15 minutes. Once I explained to him that I had been in active labour for a few hours then, and that this was the start of this labour, he settled down and we both laughed about the misunderstanding.

We put our boys to bed, who wondered if the baby was coming soon and we told them that it could be hours yet. At 11:00pm, I called my midwife and as there was no active labour pattern, she told me to try and get some rest and call her when labour had established itself. Doug and I chilled out in our bedroom – it was a wonderful restful, intimate time as we chatted and relaxed. Contractions started at 11:30pm (it should be noted that we were so relaxed that Doug dozed off while timing the first few contractions. LOL) and by12:30am they were becoming uncomfortable, so I asked my midwife to come and got into my tub to get some relief.

Our midwife and dou 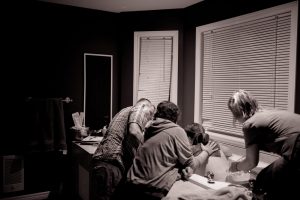 la arrived at 12:45pm and my contractions were 3 minutes apart and were lasting 1 minute. At this point things went fast, and got blurry as I quickly dilated (my midwife did not do any internal exams – she usually doesn’t do them as she can usually tell how quickly a woman is dilating by observing her). I can remember feeling some fear as my contractions got more intense and asked Doug to write out a paper remedy for aconite which took care of it instantly. My doula and midwife were amazing using comfort methods between contractions such as ice cold cloths on my shoulders, giving me ice and water (at this point I wanted nothing to eat) and lots of encouragement, especially when I hit transition and decided that I didn’t want to have a baby after all. LOL. Doug was a rock star went things got tough for me, helping me in and out of the tub, keeping me reassured when I felt I couldn’t do one more contraction, and letting me squeeze whatever parts of him I had a hold of during contractions. I had assumed a half squat in my tub and it was suggested that I move around more but after changing positions, I quickly realized that I had naturally assumed the best position for me and quickly went back to it and stayed in that position until I was fully dilated – a great example of my body knowing what is right for it when left alone to follow its own guidance.

I started pushing at ~2:35am and started to lose control for a moment with the tremendous forces urging this baby down. My midwife quickly r 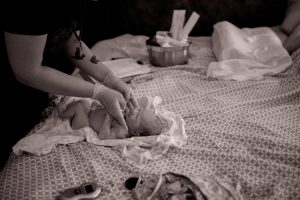 eminded me that this was a big baby and if I didn’t go slow, I could tear. I listened to her and put every effort into relaxing and letting my body move the baby on its own. At this point I was lying back in the tub and Doug was supporting my upper body. As Seamus was moving down, I could feel my hips shift slightly to accommodate him and within 10 minutes he was crowning. He had turned during labour from OP to OA (I had been doing paper remedies of Kali-carb throughout labour to help him turn) and once his head was out, I took a two-minute break while waiting for the next contraction – my midwife said he was rotating his shoulders underneath the public bone during this time. This seemed like a long time for Doug who initially worried about our baby’s head being out under water for such a period of time, but my midwife assured him, that baby was fine and was being given oxygen through his cord. I didn’t want to push anymore at this point (not that I had done a lot, as my body had done most of it without any effort on my part), but my last contraction took over and with one push, Seamus was born at2:50am. 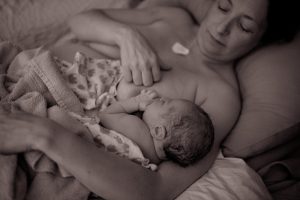 He gave a little cry and quickly settled on my chest. Heated towels were put around him while we relaxed in the tub waiting for the placenta to detach. The cord stopped pulsating after 15 minutes so Doug cut it and my placenta was delivered 15 minutes later (actually I stood up and after the smallest of pushes it fell out). I had no tears from the delivery which was great seeing that he was our biggest baby weighing 8pds, 7 ounces. Seamus was peaceful and alert after the delivery and Doug and I spent the rest of the night/morning relaxing in bed with our new baby (I did a paper remedy of arnica to help me with my recovery).

My recovery was very short as all soreness had left within 24 hours of the birth (I also took birth remedies after the delivery), and all bleeding at stopped 4 days after delivery. I had my placenta encapsulated and started taking the capsules 5 days after birth. Breastfeeding is going well, and I’m feeling great. ~ By Lisa Power

Lisa asked me to point out to you the paper rx written on paper and laying on her chest in the photo above for those of you in the know. <wink>