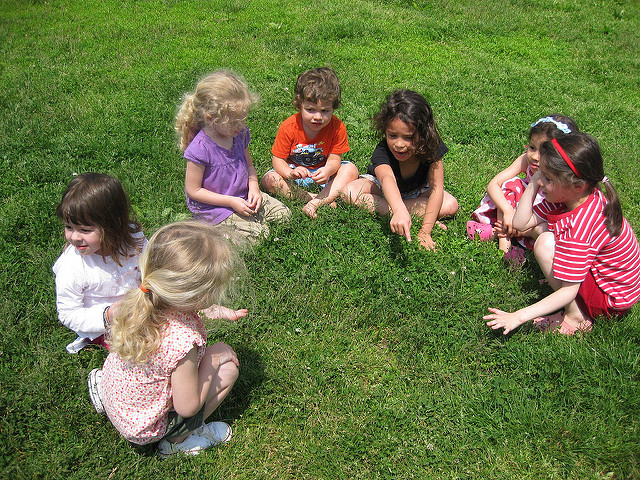 “circle of friends” by Valentina Powers

Rudolf Steiner, Spiritual Scientist, and founder of Waldorf Education and Anthroposophic Medicine cites that children can’t in fact subsume, in a healthy fashion, reading, writing or mathematical concepts until well after the milk teeth have fallen out. The idea being that if you wake a child too early to intellectual machinations, you damage the fine tuning of their etheric (creativity and absorption) and astral (artistry and inspiration) integration.

In this over-intellectualized and mechanistic epoch in which we live, one of the greatest crimes I see in healthcare is over-intellectualized adults who struggle with accessing all of their organs for knowledge. They’re just not properly integrated! This produces anxiety and neurosis on a large scale as their capacity for trusting their inner guidance system (gnosis) has been tarnished due largely to the tyranny of forced education.

Parents who live in fear that their child won’t be able to compete in this global culture unless they’re bullied into unfolding their egghead processes early on, actually destroy their child’s innate capacities to become lifelong learners, something which ought to be borne as a self-inspired, inside-out gesture. Real knowledge has never been a successful outside-in game and never will be. You’ve heard the maxim, “When the student is ready, the teacher appears.”

A natural curiosity is the stuff of health. It propels us from the Godhead of our ordination as human beings (not human doings) otherwise as children we’d never ask questions like, “Why is the sky blue?” If this innate desire is squashed, and replaced by government curricula and unproven homework that turns parents into hateful enforcers instead of advocates and protectors, we destroy a child’s delicate intuition.

When will we come to wholly trust, and have faith, that each of us will ask the questions – from an internal fount whose source is beyond our comprehension – that will propel the answers towards us? When will we come to the understanding that as we progress through our spiritual unfolding, our nuanced capacity to know will flow and ebb with each consciousness soul phase we blunder through so that we’re married to the functional purpose that evolution pours through each one of us?

When will we know that the gesture to bully and shove round pegs into intellectually limiting square holes is on its way out and that feminine wisdom is mounting a luminous trail so self-sustaining and rejuvenating that the silos of patriarchy are being revealed, and breaking down at an amazing rate? When will we know that the desire to “know thyself” is so flipping compelling to each one of us that its intrinsic nature is something to be preserved, not browbeaten or terrorized with ridiculous tests.

When will we preserve the essence of our innately curious being-ness as wonder-filled seekers?

When will we know?