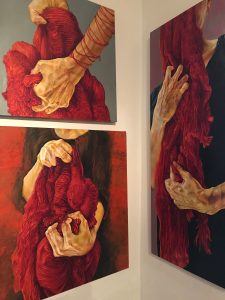 When the kids were still at home, we had a couple of systems that worked well as we had two busy practices, both of us were doing postgraduate research and we had a farm to also run. Basic stuff had to get done, but I was unwilling to be the sacrificial lady lamb in the equation. Jeff, also, would not allow this to happen to me, either, so we developed some basic systems.

Every week we had a white board on the fridge and the four of us would divvy up the chores to be done that week, listed for each day. We also had laundry-folding parties where everyone would meet in the living room, the clean laundry spilt out of the baskets onto the floor and then everyone would help sort by pitching undies, shirts, pants etc. at each other until it all got distributed. Great hand-eye coordination and memory work with this one! Each person had their own basket to fold (or gather) their clean clothes into and then put them away in their drawers or closet.

If the kids needed help, they would ask as we buddied up when one child was smaller and more challenged with the task at hand, but they were generally part of the sorting party by the time they were 4 and running the washer and dryer by 12. Sometimes their clean clothes lived in that basket until they got to the bottom, but it had to be kept in their closet. It was their choice as long as it was “put away.”

The other thing that helped a lot is that we had a shared grocery/general shopping list app on our phones divided into categories like “market,” “grocery store” or “hardware store.” If stuff needed to get on the list, like ‘cheese’, the child had to use our phones to load it on there or it wouldn’t get bought. Over time, they both got better at spelling these items … but often either Jeff or I would be standing in the grocery aisle laughing ourselves silly as Jordan got good at writing items like, “monkey balls” or “penis pickles.”

When they were in their teens, they had the same shared list on their own phones and then when they drove, they also did the groceries. Yay! We helped to grow them into these shared roles from the time that they were little. They were also taught how to manage bills, make payments, and budget accordingly. Now, we’re showing them how to invest in ways that yield solid returns.

The idea was/is to make it fun, there was always some joking around, and the burden was never all on my shoulders to be the Queen-pin of our domestic operations. We also divvied up the cooking and everyone took a night or two preparing supper for the family. We ate a lot of the same things and our crock pot got a lot of use. Sundays, we’d get some music on, Adie would often bake (her Scottish shortbreads are to die for), I’d prepare one meal, Jeff another and Jordan would be designated sous chef or dishwasher. The key was that we worked together at all of it … including mucking out the stalls in the barn. It built a sense of teamwork and belonging. A dull knife and a carrot can keep a toddler busy for quite awhile!

In our practice, we see a lot of women chronically in a Sepia state (the careworn mother) or Cancer state of mind (rescuing others to the exclusion of self). It is important to activate the health and well-being of our essential selves so as not to default to this program often wrought by our fore-mothers. Trying to work full-time and/or homeschool and then also deal with all of the responsibilities of hearth and home (or farm) can start out as protracted stress and then become, over time, Sepia or Cancer states qualifying you for more aggressive treatments. Is it time to wake from your resignation?

Here’s the original article, by Lisa Wade, that this blog was inspired by ….

2 thoughts on “Women’s Work; How To Lessen The Burden”